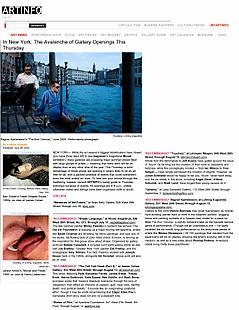 In New York: The Avalance of Gallery Openings This Thursday
Andrew Russeth

NEW YORK— While the art season's biggest blockbusters have closed (you have three days left to see Gagosian's magisterial Monet exhibition), many galleries are preparing major summer shows filled with large groups of artists — meaning that more work will be on display than at any other time of the year. This Thursday, a solid percentage of those shows are opening in what's likely to be an art free-for-all, with a packed schedule of events that could overwhelm even the most ardent art lover. To best plot your course through the sweltering masses, consult ARTINFO's handy guide to Thursday evening's bonanza of events. All openings are 6–8 p.m., unless otherwise noted, and listings have been organized north to south.

*RECOMMENDED* "Shape Language," at Nicole Klagsbrun, 526 West 26th Street, No. 213, through July 31, nicoleklagsbrun.com ?The late German painter Blinky Palermo's moment has arrived. The Dia Art Foundation is queuing up a major touring retrospective, artists like Sarah Crowner are revisiting his fabric paintings, and now one of his works, his floating blob of color titled Graue Scheibe, is serving as the inspiration for this group show about shape. Organized by gallery archivist Natalie Campbell, it includes such participating artists as wily naïf Joe Bradley, "Greater New York" painter Zak Prekop, and the unstoppable Amy Sillman. Fun fact: Palermo studied with Joseph Beuys back in the 1960s, alongside Imi Knoebel, whose work will also be on view.

*RECOMMENDED* "Touched," at Lehmann Maupin, 540 West 26th Street, through August 13, lehmannmaupin.com?Artists from the Minimalists to Jeff Koons have gotten around the issue of "touch" by farming out the creation of their work to assistants and factories, while the conceptually minded — from Ian Wilson to Tino Sehgal — have simply eschewed the creation of objects. However, as Julian Schnabel would be happy to tell you, "touch" never went away, and the six artists in this show, including Angel Otero, Allison Schulnik, and Brett Lund, have forged their young careers on it.
"Unwind," at Lana Santorelli Gallery, 110 West 26th Street, through September 3, lanasantorelligallery.com

*RECOMMENDED* Ragnar Kjartansson, at Luhring Augustine Gallery, 531 West 24th Street, through August 13, luhringaugustine.com ?Visitors to the 2009 Venice Biennale may recall Kjartansson as hirsute, hard-drinking painter hard at work in the Icelandic pavilion, slugging beers and painting portraits of a Speedo-clad model for a piece he titled The End (Venice), a joyfully irreverent take on the typically serious genre of performance. (Though not an unambitious one — he partly modeled the six-month-long performance on the endurance pieces of artists like Marina Abramovic.) All 144 paintings that resulted from the experiment will be on display, showing the artist's evolving skill in the medium, as well as a new video about Pinetop Perkins, America's oldest living Delta blues practitioner.