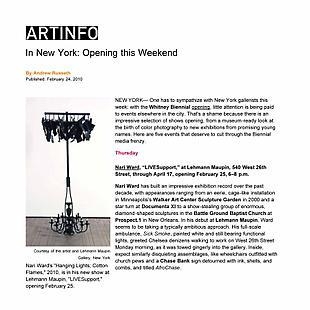 In New York: Opening this Weekend
By Andrew Russeth

NEW YORK— One has to sympathize with New York gallerists this week: with the Whitney Biennial opening, little attention is being paid to events elsewhere in the city. That's a shame because there is an impressive selection of shows opening, from a museum-ready look at the birth of color photography to new exhibitions from promising young names. Here are five events that deserve to cut through the Biennial media frenzy.

Nari Ward has built an impressive exhibition record over the past decade, with appearances ranging from an eerie, cage-like installation in Minneapolis's Walker Art Center Sculpture Garden in 2000 and a star turn at Documenta XI to a show-stealing group of enormous, diamond-shaped sculptures in the Battle Ground Baptist Church at Prospect.1 in New Orleans. In his debut at Lehmann Maupin, Ward seems to be taking a typically ambitious approach. His full-scale ambulance, Sick Smoke, painted white and still bearing functional lights, greeted Chelsea denizens walking to work on West 26th Street Monday morning, as it was towed gingerly into the gallery. Inside, expect similarly disquieting assemblages, like wheelchairs outfitted with church pews and a Chase Bank sign detourned with ink, shells, and combs, and titled AfroChase.