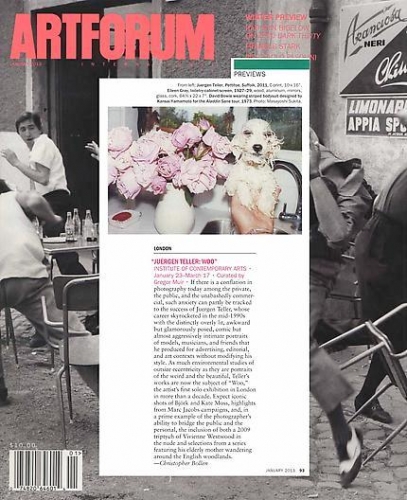 If there is a conflation in photography today among the private, the public, and the unabashedly commercial,such anxiety can partly be tracked to the success of Juergen Teller whose career skyrocketed in the mid-1990s with the distinctly overly lit, awkward but glamorously posed, comic but almost aggressively intimate portraits of models, musicians, and friends that he produced for advertising, editorial, and art contexts without modifying his style.  As much environmental studies of outsize eccentricity as they are portraits of the weird and the beautiful, Teller's works are now the subject of "Woo," the artist's first solo exhibition in London in more than a decade.  Expect iconic shots of Björk and Kate Moss, highlights from Marc Jacobs campaigns, and, in a prime example of the photographer's ability to bridge the public and the personal, the inclusion of both a 2009 triptych of Vivienne Westwood in the nude and selections from a series featuring his elderly mother wandering around the English woodlands.