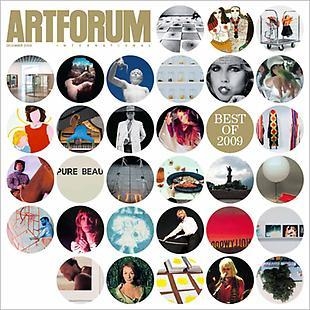 Although Juergen Teller's recent show at Lehmann Maupin (his fifth solo there) was billed as a project "blurring the distinction between his commercial and non-commercial work," for the photographer it's essentially without a difference. His practice moves with lucrative ease between the two worlds – in the pages of Vogue or W one day and on the walls of the Foundation Cartier or Tate Modern the next. Teller has made a tidy career selling precious tings without appearing to be selling them (is it any wonder he's found a home in the contemporary art world?) and does it so nimbly that perhaps the most relevant question to ask is not whether he's better understood as a commercial photographer with an artist's eye or a fine artist with a commercial heart, but more simply: What's he hawking this time?

Teller's new series of large C-prints, "Paradis," 2009- originally commissioned for the page by the French men's magazine of the same name- is at first glance selling what the photographer typically has on offer: access, intimacy, sexuality, and a rather chilly sort of antiglamour built around his celebrated ability to coax unexpected, and often unflattering, behavior from his well-known female subjects. (This is, after all, the same photographer who famously stuffed Victoria Beckham into a shopping bag like a piece of overripe produce for one of his ubiquitous Marc Jacobs ads a few years ago.)

Like much of his fashion and advertising work, this series of nude studies- featuring Brazilian supermodel Raquel Zimmermann and English actress and longtime Teller muse Charlotte Rampling, posed in the galleries of an empty Musee du Louvre- is shot in a studiously haphazard style: crookedly framed, oddly cropped, and strategically overlit, producing the brand of blown-out verite characteristic of Teller's work. More thoughtful and possessed of a much lighter touch than the simpleminded horndog epigones like Terry Richardson who have capitalized on his approach, Teller has nevertheless spent a fair amount of time shooting what is in effect a kind of consumerist erotica. And on the face of it, these images (each titled simply Paradis, followed by a number and dated 2009) have many of the hallmarks of Teller's approach to skin- a raw directness and reluctance to idealize feminine beauty (at least in any conventional way) that some find refreshing and others cruel. Zimmermann and Rampling, famous beauties separated in age by nearly four decades, are shot both separately and together in the depopulated museum like a mini Vanessa Beecroft array: lounging on a settee in the airy allee of the Grand Galerie, posing amid over-size marbles and caryatids, slouching naughtily against the rail that guards the Mona Lisa.

So far, so Teller. But a funny thing happens on the works way to the gallery: Love it or hate it, the animating tensions Teller produces in his advertising work, especially the Marc Jacobs spots, where the purposeful absence of the commodity in question does in fact modestly deform the standard mechanisms of representation and desire, never coalesce in these images. What we get instead (despite the supposed transgression of putting naked ladies in a fancy museum) is fairly banal, and finally rather stuffy, conceptual program around the relationship between the "idealized" forms of classical sculpture and the bodies of "real" women (like supermodels and famous actresses), punctuated with what in this context feel like gratuitous images of artworks alone: an overflashed close-up of David's Coronation of Napoleon and Josephine, for example, or a detail of a first- century Roman statue depicting a shepherd disemboweling a deer. The scattershot, and surprisingly clichéd, "fine artist" side of Teller on view here made one pine for the direct spontaneity we've come to expect from his distinguished work as a jobbing photographer- where he may be predictably selling other people's things, but he's rarely this predictable in doing it.