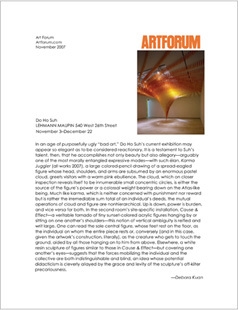 Do Ho Suh
LEHMANN MAUPIN 540 West 26th Street November 3–December 22
In an age of purposefully ugly “bad art,” Do Ho Suh’s current exhibition may
appear so elegant as to be considered reactionary. It is a testament to Suh’s
talent, then, that he accomplishes not only beauty but also allegory—arguably
one of the most morally entangled expressive modes—with such élan. Karma
Juggler (all works 2007), a large colored-pencil drawing of a spread-eagled
figure whose head, shoulders, and arms are subsumed by an enormous pastel
cloud, greets visitors with a warm pink ebullience. The cloud, which on closer
inspection reveals itself to be innumerable small concentric circles, is either the
source of the figure’s power or a colossal weight bearing down on the Atlas-like
being. Much like karma, which is neither concerned with punishment nor reward
but is rather the irremediable sum total of an individual’s deeds, the mutual
operations of cloud and figure are nonhierarchical. Up is down, power is burden,
and vice versa for both. In the second room’s site-specific installation, Cause &
Effect—a veritable tornado of tiny sunset-colored acrylic figures hanging by or
sitting on one another’s shoulders—this notion of vertical ambiguity is reified and
writ large. One can read the sole central figure, whose feet rest on the floor, as
the individual on whom the entire piece rests or, conversely (and in this case,
given the artwork’s construction, literally), as the creature who gets to touch the
ground, aided by all those hanging on to him from above. Elsewhere, a white
resin sculpture of figures similar to those in Cause & Effect—but covering one
another’s eyes—suggests that the forces mobilizing the individual and the
collective are both indistinguishable and blind, an idea whose potential
didacticism is cleverly allayed by the grace and levity of the sculpture’s off-kilter
precariousness.
—Debora Kuan