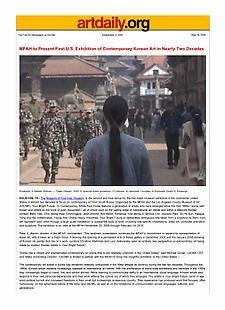 HOUSTON, TX.- The Museum of Fine Arts, Houston, is the second and final venue for the first major museum exhibition in the continental United States in almost two decades to focus on contemporary art from South Korea. Organized by the MFAH and the Los Angeles County Museum of Art (LACMA), Your Bright Future: 12 Contemporary Artists from Korea features a generation of artists who have emerged since the mid-1980s—some well-known and others on the brink of such recognition—all of whom work on the cutting-edge of international art trends and within a distinctly Korean context: Bahc Yiso, Choi Jeong-Hwa, Gimhongsok, Jeon Joonho, Kim Beom, Kimsooja, Koo Jeong-A, Minouk Lim, Jooyeon Park, Do Ho Suh, Haegue Yang and the collaborative, Young-Hae Chang Heavy Industries. Your Bright Future (a deliberately ambiguous title taken from a sculpture by Bahc Yiso) will represent each artist through a large-scale installation or substantial body of work, including site-specific installations, video art, computer animation, and sculpture. The exhibition is on view at the MFAH November 22, 2009 through February 14, 2010.

Peter C. Marzio, director of the MFAH, commented, "This landmark presentation continues the MFAH´s commitment to expand its representation of Asian art, with Korean art a major focus. Following the opening of a permanent Arts of Korea gallery in December 2007 and the January 2008 showing of Korean ink painter Suh Se-ok´s work, curators Christine Starkman and Lynn Zelevansky open an entirely new perspective on extraordinary art being made by modern Korean artists in Your Bright Future."

"Korea has a vibrant and sophisticated contemporary art scene that is still relatively unknown in the United States," said Michael Govan, LACMA CEO and Wallis Annenberg Director. "LACMA is thrilled to partner with the MFAH to bring this insightful exhibition to the United States."

The contemporary art scene in Korea has remained relatively unexplored in the West despite its vibrancy during the last two decades. Throughout the 1980s, Korean artists became increasingly exposed to international art trends. With the proliferation of world-wide exhibitions and biennials in the 1990s, they increasingly began to travel, live, and exhibit abroad. While learning to communicate deftly in an international visual language, Korean artists also respond to their own personal experiences and their work reflects the culture out of which they emerged. The artists in Your Bright Future came of age amid political turmoil and increased freedoms in their small but increasingly prosperous country. Their experience has produced work that focuses, often humorously, on the ephemeral nature of life, time, and identity, as well as on the limitations of communication across languages, cultures, and generations.

Gimhongsok and Jeon Joonho address South Korea´s place in the world, as well as the complex relationship among the U.S., North Korea, and South Korea. Gimhongsok´s video projection G5 (2004), features five Koreans singing a heartfelt rendition of the national anthem of one of the G5 countries (U.S., United Kingdom, France, Japan, Germany) in Korean. Though an initial response may be amusement at the discordance of hearing familiar, patriotic tunes sung in a foreign language, the question arises whether the singers are somehow subservient to the powerful nations whose songs they sing. In White House (2004), Jeon focuses on an American iconic image, the twenty dollar bill, to comment on the continued power and influence of the United States to the changing social, economic and political environment in Korea.

Other artists in the exhibition examine the sociological effects of Korea´s rapid modernization. In his most recent work, Do Ho Suh uses the elements of architecture as a metaphor for his art practice. In 1994, Suh began making "fabric architecture," using filmy, translucent textiles like silk and nylon to create ghostly and fragile renderings of his childhood home that evoke homesickness and the sense of loss. These works, often large-scale installations, meld seeming opposites, like the notions of inside and outside, personal and public, past and present. In Fallen Star, 1/5 (2008), Suh shows a violent collision between a traditional Korean house and a Providence apartment, where the artist lived during his graduate student days at Rhode Island School of Design. Fallen Star is part of a thirteen chapter autobiographical narrative that Suh has written about his departure from Korea, displacement and discovery of home that he carries where ever he goes.

Kim Beom questions Korean mass media in Untitled (News) (2002), for which he edited together numerous television news broadcasts in clips short enough to alter what the reporters were saying. Instead of reporting on events of the day, these familiar figures spout statements that vacillate between the inane and poignant. Using humor, the work questions whether the actual words of such television personalities are more enlightening than the ones that Kim has put in their mouths. Minouk Lim´s three-channel DVD projection Wrong Question (2006) records an anonymous taxi driver who does not understand the progressive elements of South Korean society, and conflates pro-democracy and pro-communist factions. On the adjacent screen is Lim´s young daughter, who dreams of her mother staying home instead of leaving to work. Her grandfather instructs her instead to say, "I´ll be a great painter like Mom." "What´s a painter?" the child asks. The two seem to be participating in different conversations—the products of radically divergent life experiences.

Kimsooja reflects upon the inter-dependency and and inter-connection of people. In the six channel video, Needle Woman (2005-2006), Kimsooja stands in the middle of the screen with her back to the audience and crowds of people walk in and around her from different parts of the world, making us aware of the differences among cultures but also what connects us all, our desires and hopes as human beings.

The works of Haegue Yang, Koo Jeong-A, and Jeong-Hwa Choi address what lies on the periphery of everyday experience, impermanent traces of human existence, and the hidden or ephemeral. Yang´s Storage Piece (2004), is composed of crated and wrapped works by the artist. Unsold, the pieces were returned to her after an exhibition; with a show coming up and no space to store her old pieces, she decided to exhibit them wrapped. The work is amusing, but also rooted in a genuine complaint regarding the accumulation of artwork, which artists frequently cannot afford to store. Too often it takes over their studios—a reminder of the failure to sell. Yang´s Storage Piece is a comment on the belief and emotions attached to the permanence of things. Like Yang, Koo Jeong-A is concerned with easily overlooked objects and situations, frequently photographing mundane environments; creating drawings that are so minimal in their physicality that they become elusive; and installing tiny sculptures high on a wall or low in a corner. Jeong-Hwa Choi also explores the disregarded elements of human life, gathering eclectic materials and found objects (including "trash") to create site-specific installations. For the Los Angeles installment of Your Bright Future, Choi selected plastic containers discovered in a Mexican neighborhood in Los Angeles to create indoor and outdoor installations. In Houston, Choi will collect his material from the neighborhood markets and will create a new, site-specific work for the Museum.

In Suckerdom (2009), web-based artists Young-Hae Chang Heavy Industries, uses Flash animation to deliver their message to the world. In their work, Young Hae Chang and Marc Voge are acutely aware of the power and limitation of language. Suckerdom expresses their daily frustrations, struggles and triumph as artists living in 21st century.

Jooyeon Park, the youngest artist in the exhibition, uses written words, as well as performance, video, photography, found objects, and sculpture to stress the fragility of existence. She believes language is an inadequate communication system and often creates works by jumbling found texts.