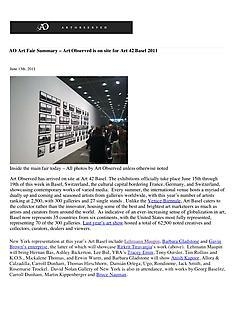 Art Observed has arrived on site at Art 42 Basel. The exhibitions officially take place June 15th through 19th of this week in Basel, Switzerland, the cultural capital bordering France, Germany, and Switzerland, showcasing contemporary works of varied media. Every summer, the international venue hosts a myriad of dually up and coming and seasoned artists from galleries worldwide, with this year’s number of artists ranking at 2,500, with 300 galleries and 27 single stands. Unlike the Venice Biennale, Art Basel caters to the collector rather than the innovator, housing some of the best and brightest art marketeers as much as artists and curators from around the world. As indicative of an ever-increasing sense of globalization in art, Basel now represents 35 countries from six continents, with the United States most fully represented, representing 70 of the 300 galleries. Last year’s art show hosted a total of 62,500 noted creatives and collectors, curators, dealers and viewers.

Icelandic gallery i8 will be showing at booth K3, which represents the reflective installations of Olafur Eliasson among other Icelandic and Scandinavian artists. Eliasson’s pieces combine architectural and scientific pursuits to shape designs and interactive viewing phenomena. The Bortolami Gallery will be at Basel, showcasing Aaron Young, Richard Aldrich, and Tom Burr.

Every day of the series will be marked by an art talk with multiple experts in the field. The opening conversation will be with artist Allen Ruppersberg in discussion with curator and writer Jay Sanders. Both are American with strong ties to New York City. Additionally relevant talks, such as “How Will Museums Be Able to Collect?” with directors of the London-based Tate Modern and incoming director to theVictoria and Albert Museum, as well as New York’s deputy director and chief curator of the Solomon R. Guggenheim Museum, Nancy Spector. In addition, Dubai and Russian experts will address patronage and politics, as geared towards collectors. On Saturday and Sunday, urbanist futures and the concept of ‘Alternative’ will be addressed by multicultural representation from Antwerp, Berlin, London, Milan, Rome, Tokyo, Norway and New York.

Berlin-based PSM-Gallery brings American born Daniel Jackson. Now a veteran of European education and exhibition, he will stand alone as a solo exhibitor at Basel, with Art Statements through PSM.

During Art 42 Basel, concurrent collections will also showcase at local museums. Notable exhibitions include Constantin Brancusi and Richard Serra at Fondation Beyeler in Riehen, Switzerland. Serra, an American artist, is represented in New York by Gagosian Gallery. Although Serra is arguably best known for his sculptures, the Fondation Beyler is currently showcasing some of his earlier works as well.

SCOPE runs concurrently to Basel as well, in a separate pavilion that is over 5000 square meters. SCOPE hosts fairs in Basel, Miami, London, New York and the Hamptons, and continues to expand since its inception in 2002. The SCOPE Art Show boasts critical acclaim and $150 million in sales revenue.

The local Museum Tinguely‘s Car Fetish. I drive therefore I am. opened June 8th, touching on the significance of individualized and spatial significance of automobiles since their invention.

Henrik Olesen’s exhibition at Kunstmuseum Basel’s contemporary sector (gegenwartskunst) runs parallel to Art Parcours, a body and sculpture-based installation series located at the scenic St. Alban Tal along the Rhine. Both Oleson and Art Parcours experiment with the body’s response to physical counter-normativity in the face of social and political oppression. Olesen’s How do I Make Myself a Body(2009) tells the story of English mathematician and computer inventor Alan Turing, who was medically maltreated by British authorities. A complementary dance performance through Art Parcours, entitled, Bodies in Urban Spaces, will take place on Thursday. Participants in Art Parcours are Ai Weiwei (who is currently detained in China), Janet Cardiff, Ugo Rondinone, Yinka Shonibare, Gabriel Sierra and others.

Art Basel is also being broadcast via satellite, with The Solo Projects, for an in-depth, birds-eye view, even remotely.