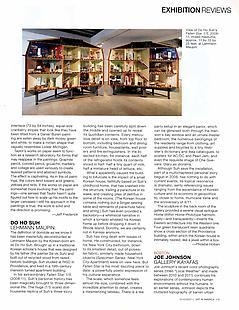 Do Ho Suh
By Phoebe Hoban

The definition of domicile as we know it has been masterfully deconstructed at Lehmann Maupin by the Korean-born artist Do Ho Suh. Brought up in a traditional Korean scholar's house that was designed by his father (the painter Se-ok Suh) and built out of recycled wood from razed historic buildings, Suh studied at RISD in Providence, and lived in a 19th-century mansion turned apartment building.

In his extraordinary Fallen Star 1/5 (2008-11), Suh's personal history has been magically brought to three-dimensional life. The huge (1/5 scale) doll-houselike replica of Suh’s three-story building has been carefully split down the middle and opened up to reveal its quotidian contents. Every meticulous detail is on view, from top floor to bottom, including bedroom and dining room furniture, houseplants, wall posters and fire extinguishers. In the bisected kitchen, for instance, each half of the refrigerator holds its contents sliced in half: half a tiny quart of milk, half a miniature head of lettuce, etc.

What's apparently caused the building to bifurcate is the impact of a small Korean house, faithfully based on Suh's childhood home, that has crashed into the structure, trailing a parachute in its wake, and creating piles of detritus in some of the rooms. (The Korean house contains nothing but a Singer sewing table and remnants of parachute fabric and string.) Suh has even provided a backstory--a whimsical narrative in which a tornado whisked his Korean home up before dropping it down in Rhode Island. Dorothy, we are certainly not in Kansas anymore.

Suh has long dealt with issues of home. He constructed, for instance, his New York City bathroom, down to its smallest detail, out of polyester fabric; similarly made household objects (Specimen Series: New York City Apartment) were on view here. But Fallen Star is his most dazzling piece to date: a powerfully poetic expression of his cultural experience.

The scale, which somehow feels almost life-size, combined with the incredible attention to detail, creates a mesmerizing tableau. There is a tea party setup in an elegant parlor, which can be glimpsed both through the mansion's bay window and an ornate master bedroom; the numerous belongings of the residents range from clothing, art supplies and bicycles to a tiny Webster's dictionary and Ikea catalogues, to posters for AC/D C and Pearl Jam, and even the requisite image of Che Guevara: Diary as diorama.

Although Suh says the installation, part of a multichaptered personal story begun in 2008, has nothing to do with current events, its topical resonance is dramatic, eerily referencing issues ranging from the ascendance of Korean culture and its economy in geopolitics to, closer to home, Hurricane Irene and the anniversary of 9/11.

The sculpture in the back room of the gallery provided a serene visual epilogue. Home Within Home-Prototype harmoniously--and transparently--inserts the Eastern architecture into the Western one. Four green translucent resin quadrants show a cross section of the Providence building, within which the Korean house is intimately nested, like a jewel within a box.