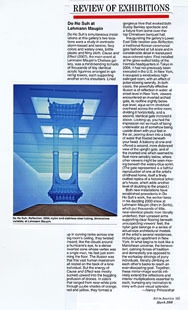 REVIEW OF EXHIBITIONS
Do Ho Suh at
Lehmann Maupin
Do Ho Suh's simultaneous installations
at this gallery's two locations
were a study in contrasts:
storm-tossed and serene, fiery
colors and watery ones, brilttle
plastic and filmy cloth. Cause and
Effect (2007), the main event at
Lehmann Maupin's Chelsea gallery,
was a mind-bending tomado
of thousands of tiny identical
acrylic figurines arranged in spiraling
towers, each supporting
another on his shoulders. Lined
up in curving ranks across one
big room's ceiling, they twisted
inward, like the clouds around
a hurricane's eye, to a dense
inverted cone whose vertex was
a single man, his feet just skimming
the floor. The illusion was
that this vast human maelstrom
all rested on the back of a lone
Individual. But the energy of
Cause and Effect was mostly
sucked upward into the boggling
profusion of drones. In colors
that ranged from near-white pink
through Jujube shades of orange.
red and yellow, they formed a
gorgeous hive that evoked both
Busby Berkley spectacle and
a fixture from some over-the-top
Chinatown banquet hall.
Inaugurating the gallery's Lower
East Side location was Reflection,
a traditional Korean ceremonial
gate fashioned at full scale and in
considerable detail in translucent
aqua-colored nylon. First installed
at the glass-walled lobby of the
Hermes headquarters in Tokyo in
2004, it had not previously been
executed in the U.S. In New York.
it occupied a windowless high-ceilinged
room, with an effect of
pulse-slowing serenity. In both
cases, the powertully effective
illusion is of reflection in water: at
street level in New York, viewers
encountered an inverted arched
gate, its roofline slightly below
eye level; aqua scrim stretched
overhead across the entrre room,
dividing It horizontally, and a
second, identical gate mirrored it
above. Looking up, you had the
impression not so much of being
underwater as of somehow being
upside down with your feet in
the air, peering down into a body
of water that floated beneath
your head. A balcony at one end
offered a second, more distanced
view of the upright gate, and of
the inverted one which seemed to
float more sensibly below, where
other viewers might be seen movIng
beneath the watery-blue scrim.
(The gate represented is a faithful
reproduction of one at the artist's
childhood home, itself a finely
crafted replica of a historical scholar's
house, which adds another
level of doubling to the project)
Both new installations have
established precedents in Do
Ho Suh's work. The worker bees
in his dazzling 2000 show at
Lehmann Maupin (then in SoHo).
which put thousands of little,
near-identical plastic men literally
underfoot, their upraised arms
supporting clear flooring beneath
unsuspecting viewers' feet; the
nylon gate belongs in a series of
actual-size architectural models
of the artist's several residences,
including an apartment in New
York. In what begins to look like a
Manlchean universe, the benevolent
calming forces of tradition
and domesticity are opposed to
the workaday strivings of puny
Individuals, literally climbing on
each other's backs to reach an
ever-dissipating goal. Together,
these mirror-image worlds infinitely
extend the reflections and
interior multiplications essential to
each, trumping any inclination to
irony with pure visual splendor.
-Nancy Princenthal
Art in America
March 2008