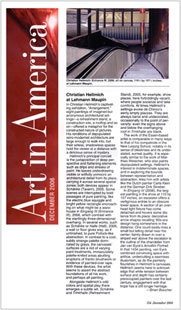 In Christian Hellmich's captivating exhibition, "Arrangement," eight paintings of imagined but anonymous architectural settings--a refreshment stand, a construction site, a rooftop and so on---offered a metaphor for the constructed nature of pictures. His renditions of depopulated retro-modernist architecture are large enough to walk into, but their airless, shadowless spaces hold the viewer at a distance with a delicious sense of mystery.

Hellmich's principal conceit is the juxtaposition of deep perspective and flattening elements such as drips and streaks of paint. He leaves underdrawing visible or willfully unmoors an architectural detail from its place, carrying it across several spatial zones; both devices appear in Schanke (Tavern), 2005. Some scenes are interrupted by bold passages of pure painting, like the electric blue squiggle and bright yellow rectangle encroaching on what might be a warehouse in Eingang III (Entrance III), 2006, which contrast with the startlingly three-dimensional overhang. In several works, such as Schanke or Halle (Hall), 2006, a wall or floor gives way, as if unfinished, to pure Pollock-like abstraction. In contrast to a cool, subtly strange palette dominated by grays, the canvases' surfaces are a riot of varying paint treatments, immaculately palette-knifed areas abutting eruptions of frantic brushwork or evidence of painted-over tape. With these devices, the artist seems to assert the abstract foundations of all his work, and perhaps all painting.

Alongside Hellmich's odd colors and spatial play there emerges a subtle wit. Schanke and Trinkhalle (Refreshment Stand), 2005, for example, show places, here forbiddingly vacant, where people socialize and take comforts. At times Hellmich's settings evoke de Chirico's eerily empty piazzas. They are always banal and undecorated, occasionally to the point of perversity: even the signs above and below the overhanging roof in Trinkhalle are blank.

The work of the Essen-based artist is comparable in many ways to that of his compatriots in the New Leipzig School, notably in its sense of bleakness and its understated, surreal quality. It is especially similar to the work of Matthias Weischer, who also paints depopulated settings. Hellmich's interest in indeterminate spaces, and in exploring the bounds between representation and abstraction, links him with artists like the Dutch painter Carla Klein and the German Dirk Skreber.

In Eingang IV (2006), the largest painting in the show at 110 by 157 inches, an escalator offers a vertiginous entree to an obscure lower space. A section of an overhead light fixture has come detached and hovers some distance from its place; decorative arrow shapes recalling '60s-era design hang somewhere in the distance. One could easily miss a small but telling detail near the center: faintly drawn in over a striped wall above the escalator is the outline of the chandelier from Jan van Eyck's Amolfini Portrait. In that 1434 painting, van Eyck combined convincing space with artifice, undercutting a seamless illusionism, as do the painterly flourishes in Hellmich's canvases. Hellmich seems here to acknowledge that while tension between surface and depth has certainly preoccupied painters over the last century, engagement with that trope has a still longer heritage.