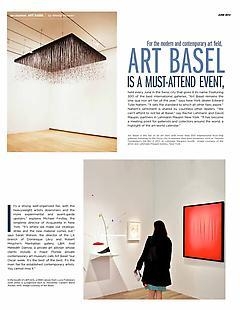 For the modem and contemporary art field, Art Basel is a must-attend event, held every June In the Swiss city that gives it its name. Featuring 300 of the best International gallerre.s, "Art Basel remains the sine qua non art fair of the year," says New York dealer Edward Tyler Nahem. "It sets the standard to which all other fairs aspire." Nahem's sentiment is shared by countless other dealers. "We can't afford to not be at Basel," say Rachel Lehmann and David Maupin, partners in Lehmann Maupin New York, "It has become a meeting point for gallerists and collectors around the world, a highlight of the art-world calendar."

It's a strong well-organized fair, with the heavyweight artists downstairs and the more experimental and avant-garde upstairs: explains Michael Findlay, the longtime director of Acquavella in New York. "It's where we make our strategic strike and the new material comes out; says Sarah Watson, the director of the LA branch of Dominique Lévy and Robert Mnuchin's Manhattan gallery, L&M. And Meredith Darrow, a private art adviser whose clients Include a major Florida private contemporary art museum, calls Art Basel "our Oscar week. It's the best of the best. It's the maIn fair for established contemporary artists. You cannot mIss It."

And few serious art lovers do. Last year, 65.000 people attended the fair. "Every single hotel room is taken." says Darrow (who also happens to be my niece). This year, Art Basel is open to the public from June 14 to June 17, with additional sideshows, including Art Unlimited (a pioneerIng exhibitIon platform for 62 large-scale projects that don't fIt into a classIc art-show stand, such as Video projections, installations, sculptures and live performances): Art Parcours (site-specific works displayed in the city's historic neighborhoods): and Design Miami/Basel (June 12-17), in which 1stdlbs dealers Demisch/Danant, R 20th Century, Todd Merrill and Hostler Burrows are participating. Adviser Darrow says she spends a full week at the fair, much of it with her private-museum client, and that's after doing considerable research in advance and mapping out which galleries she must review quickly at the VIP opening on Tuesday to be sure her client sees specific works before anyone else can buy them. (The VIPs had special access to the fair yesterday and at today's vernlssage.)

"It's not at all like Art Basel Miami in December," she continues. "It's not as flashy as Miami. It's more serious. Less fashion, more black - and sensible shoes. Fewer cocktail parties, more exclusive dinner parties." Findlay of Acquavelia concurs: "The difference is night and day. There's not the razzle-dazzle In Basel - and unlike in Miami, private collectors in the region keep their doors firmly shut."

Todd Merrill, a New York design dealer who is showing at Design Miami/Basel and has also exhibited in Miami, appreciates the contrast. "Basel is a crossroads of the world." he says. "It's more International. Last year I sold a $1.4 million Harry Bertoia sculpture to a Chinese client, and Zeng Fanzhi [an Important Chinese artist] commissioned a wooden bench from Yard Sale Project, the South London partnership of cabinetmaker Ian Spencer and designer Cairn Young."

"There's been an overwhelmIng response, primarily from Europeans," Cheim & Read partner Adam Sheffer reported shortly after the first VIP preview yesterday. "The few Americans I have seen so far are top collectors like Eli Broad, Beth Rudin DeWoody and Howard Rachofsky." The gallery is showing two spectacular Joan Mitchell oils from the early 1960s, a ravishing red Louise Bourgeois untitled watercolor from 2006, a striking Hans Hartung acrylic from 1983 and photographs by William Eggleston.

In keeping with the international spirit that is Basel, Lehmann Maupin Gallery has partnered with London's White Cube gallery to present a Gilbert & George mixed-media piece, Family StraIght. 2011, in the Art Unlimited section. Standouts in the gallery's main booth include Bacchus. Dionysus (after Poussin), a 2012 Angel Otero oil: School of Fish, a recent nine-photograph work by Robin Rhode; and a touching Tracey Emin neon "I can't Believe (how much) How much I Loved You." "Established gallery artists Iike Gilbert & George, Tracey Emin, Tony Oursler and Ross Bleckner are always in demand," Lehmann says. "but that doesn't mean collectors don't show interest In a younger generation of artists, This year our biggest surprise is Ink Sky 2, a sculpture by Teresita Fernández that involved a series of chains with rocks that are suspended from a mirrored, hanging platform."

Mitchell-Innes & Nash of New York are showIng blue-chip artists like Alexander Calder (a stabile called The Lookout from 1957); a Roy Lichtenstein collage, Coup de Chapeau II, 1996; four Kenneth Noland paintings made between 1958 and 2003: and several Matisse drawings. It's a coup for a gallery just to be accepted into Art Basel. "It's like applying to Harvard: Darrow says. Contemporary art dealer Blum & Poe of LA, one of 19 first-time exhibitors, is featuring new work by Takashi Murakami and paintings by Carroll Dunham. Naturally, all the dealers, newbies and veterans alike, spend months deciding what to take with them.

L&M's Watson singles out her gallery's "special homage" to Agnes Martin at Art Basel. "We have a few spectacular Agnes Martin canvases by her," she says. "The booth reflects the programming of our gallery in New York, with a very elegant minimal aesthetic runnIng through iIt." L&M's offerings include a vibrant red Fontana "slash" painting from 1968. a pre-fIgurative Ed Kienholz, a Calder sheet-metal sculpture (Black Rocker) from 1945, a Warhol Dollar Sign from 1981, a Jeff Koons stainless-steel Inflatable Yellow Flower, 2011, and 800 Blows, a 1983 plate painting by Julian Schnabel.

In some ways, Art Basel is like The European Fine Art Fair (TEFAF), which attracts 70,000 visitors every year, many of them collectors who arrIve by private jet, but TEFAF is much stronger on antiques and Old Masters. "TEFAF is the emperor of art fairs, visually and in terms of presentatIon," observes Acquavella's Findlay, who has just written an insightful new book on the art market, The Value of Art (Prestel), in whIch he discusses the rise of art fairs. "But Basel is for modem and contemporary art, with a full program of discussions, films and ancillary activIties."

"Basel," he continues, "is where American museums like to take their trustees and where serious Europeans go to shop."