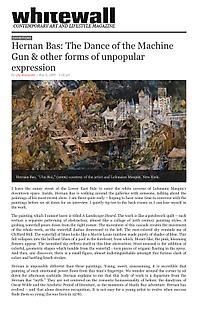 Exhibitions
Hernan Bas: The Dance of the Machine Gun & other forms of unpopular expression
By Lily Alexander

I leave the sunny street of the Lower East Side to enter the white caverns of Lehmann Maupin's downtown space. Inside, Hernan Bas is walking around the galleries with someone, talking about the paintings of his most recent show. I am there quite early – hoping to have some time to converse with the paintings before we sit down for an interview. I quietly tip-toe to the back rooms so I can lose myself in the work.

The painting which I cannot leave is titled A Landscape Heard. The work is like a patchwork quilt – each section a separate patterning of abstraction, almost like a collage of 20th century painting styles. A gushing waterfall pours down from the right corner. The movement of this cascade creates the movement of the whole work, as the waterfall dashes downward to the left. The rust-colored sky reminds me of Clyfford Still. The waterfall of blues looks like a Morris Louis rainbow made purely of shades of blue. This fall collapses into the brilliant blues of a pool in the forefront, from which, Monet-like, the pink, blooming flowers appear. The tarnished sky reflects itself in this blue abstraction. Most unusual is the addition of colorful, geometric shapes which tumble from the waterfall - torn pieces of origami floating in the spray. And then, one discovers, there is a small figure, almost indistinguishable amongst this furious clash of colors and battling brush strokes.

Hernan is impossibly different than these paintings. Young, sweet, unassuming, it is incredible that painting of such emotional power flows from this man's fingertips. We wander around the corner to sit down for afternoon cocktails. Hernan explains to me that this body of work is a departure from the Hernan Bas "myth." They are not centered on the romantic homosexuality of before, the dandyism of Oscar Wilde and the Aesthetic Period of literature, or the moments of Hardy Boy adventure. Hernan has evolved – and that alone deserves recognition. It is not easy for a young artist to evolve when success finds them so young (he was born in 1978).

This recent body of paintings began when Hernan received a book on absinthe. This led him to Alfred Jarry, famous worshipper of absinthe, and pioneer of Absurdist fiction. Jarry wrote the forerunner of Surrealist theater, Ubu Roi, characterized by its brutal humor and complete absurdity – or lack of logic. Hernan's painting of the same name is one of the masterworks of the show. This massive, two-panel work crushes me with its overwhelming energy. To the left, flesh-like mounds of mountains combine sickly colors of browns, pinks, and greens – the style is reminiscent of De Kooning's women, and the hills take on the predatory nature of these women (Hernan admits to me that often when he faces an empty canvas he will make an underpainting of a De Kooning or a Twombly and then will cover these with his own paintings). The right side shows a pastel-hued city – resembling the Russian cities of Kandinsky's early folk paintings (although Hernan tells me the city was inspired by the ride "It's a Small World" at Disneyland). From this fairy tale city emerge a cast of characters, parading out from the dark maw of the hillside. Brightly masked, the characters of Ubu Roi dance and carouse above the indigo waters – led by the main character dressed in a white costume with hood.

This book on absinthe also led Hernan to the Futurists, who he found fascinating as thinkers, rather than painters. Hernan felt that he was mired in Romanticism. He felt this romantic urge in some ways related to the life he, especially as a young gay male, was forced to lead under George Bush. In this repressed atmosphere he escaped through the romantic fantasies of his paintings. The Futurists inspired him because of their interest in new beginnings. Hernan wanted to cleanse himself of his past paintings and embrace the future – like the Futurists who rejected the past, and were swept away in the celebration of speed, youth, violence, and the machine. Futurist elements, along with other references to Modernist painting abound in this series, as geometric forms collide against the landscapes, and Frank Lloyd Wright structures create linear counterparts to the expressionistic abstractions.

Hernan finds that as he grows as an artist, he wants to get rid of the figure all together, and he must fight the desire to become a completely abstract painter. This is evident in the painting A Landscape Heard, in which the figure comes almost as an afterthought. Sitting atop a rock, the pale Dandy kicks away one of the geometric forms – in what Hernan later describes to me as a symbol of he, Hernan, deterring the abstraction which encroaches upon him. Hernan says that it is difficult because people want the typical Hernan Bas, complete with romanticized scenes of young, male love – and it is therefore difficult for him to move away from this. However, he sees himself becoming more of a true painter in the last year. Earlier his work was much more conceptual and illustrative – whereas now it has become about painting. Hernan, like many painters, feels that he has a certain obsession with the history of painting, an engagement which is evident in this body of work. He says the collage of styles is not something conscious, but as he loses himself in the paint, the various painters that have influenced him somehow share him, and take turns as they speak through the different elements of the works. For example, the Monet-like pool of abstraction in this painting is not insignificant. Hernan did a residency at Monet's Giverny when he was younger, during which he first truly came to appreciate Monet's painting. Hernan speaks of Monet's movement towards abstraction, and there is an unmistakable relationship between the quoting of the lily-ponds – the works in which Monet most clearly moves into this quasi-abstraction – and this painting, A Landscape Heard, in which Hernan allowed himself most clearly to plunge into the depths of abstraction.

What ties this work indisputably to the previous work is Hernan's passion for literature. He says that his true desire is to find a way to tell the story without a figure - a way for the landscape, the abstract elements, to tell the story alone. Just as many artists find inspiration in music, or philosophy, Hernan finds it in literature. During our discussion of the written word Hernan remarks "A good poem slays me more than any painting."
This show is an exciting move forward for a young painter with immeasurable talent. He received a great deal of attention at a young age, and there may have been some criticism of his show at the Brooklyn Museum, due to the fact that the Rubell family have strongly supported him and collected his work (why this should be a problem I do not know, for did not Lorenzo de Medici support Michelangelo?). But this newest series of paintings shows that he has a pure gift for painting. Aside from the literary interest of the work, this young man is skilled with a brush, and he has the dexterity to speak with this brush in many styles. It is this dexterity which allows him to create these works that are characterized by oppositions. The geometric contrasts the expressionistic and the linear blazes against the painterly. Lightness gives way to dark, detailed figures lose themselves in free-form landscapes and the lighthearted festivities of the paintings are wrapped in a feeling of danger. This skill, to appropriate, but to combine in such complexity, gives Hernan Bas his true voice – through which he expresses an intricacy and delicacy of meaning purely through relationships of color and form.