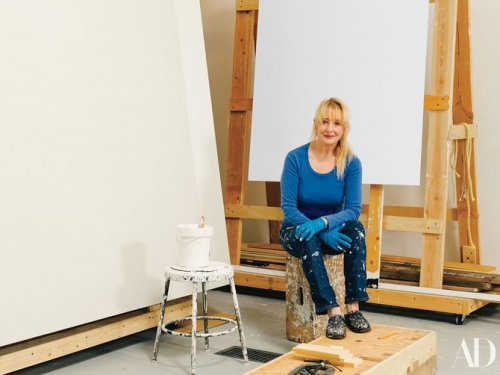 After working under the radar for more than 50 years, Mary Corse emerges from the art-world shadows with back-to-back museum and gallery openings

Nestled in a canyon on the outskirts of Los Angeles, artist Mary Corse’s house and studio are a short drive—but a world away—from the city’s hustle and bustle. Cell service cuts out en route to her home, which is reached via a single-lane bridge and winding dirt road. Neighbors are few and far between, affording Corse ample room to paint in private. Which is what she’s been doing—quietly, steadily—for more than five decades, building an important body of work while innovating on pace with established pioneers of the Light and Space movement. This May, however, she will take an overdue step center stage, with a long-term installation at Dia:Beacon and a debut show at London’s Lisson Gallery, followed by her first solo museum survey at the Whitney in June.

“Mary’s work eschews easy categorization,” says Alexis Lowry, an associate curator at Dia. “As early as 1966, she was making light-based work that was as advanced as anything by more recognizable figures like Doug Wheeler or James Turrell. But she was also radically different, using paint to harness light and make space within her paintings that extends beyond the physical.” The art world, Lowry notes, is only now giving Corse the attention she has long deserved. “A lot of Dia’s recent focus has been looking at work made by women in the sixties and seventies that has been underappreciated.”

Born in Berkeley, California, Corse started painting at the age of five, finding teenage inspiration in the abstract work of Josef Albers, Hans Hofmann, and Willem de Kooning. In 1964, she moved to L.A. to study at the Chouinard Art Institute, now CalArts, where she began using white to express light while experimenting with abstract-shaped canvases. Early all-white paintings encased in Plexiglas (so as to create pockets of space) eventually gave way to illuminated boxes that employed fluorescent lights, then argon-filled neon tubes. Eager to do away with wires, she enrolled in physics classes, engineering her own high-frequency generators using Tesla coils.

Her eureka moment came in 1968, when Corse observed reflective road markings and realized she could use the same glass microspheres found in highway paint. “I was able to put light in the painting, not just make a picture of light,” she recalls. Incorporating the prismatic material in bands and arches, she has since created nuanced abstract fields that shift depending on ambient light and the position of the viewer.

“I want to express an experience, a moment of truth,” she says. “Perception needs to be in the painting.”The technique has arguably defined her practice ever since, sparking evolutions in primary colors and—using acrylic squares—black, as well as forays into ceramics. This past September, her latest paintings debuted in New York and L.A., with simultaneous shows at Lehmann Maupin and Kayne Griffin Corcoran galleries. The latter exhibition featured a light box placed in a refrigerated room, one of several ambitious projects, long gestating, that she is now realizing. “The cold heightens your consciousness,” explains Corse, who also completed her first outdoor installation, a 2016 composition of bands on the exterior of her studio.

“You can see the focused progression of her work,” says Lowry. “There is a vocabulary of forms and a means of applying paint that she is able to revisit, rethink, and reframe.” Underpinning Corse’s practice is a desire to escape the ego and the tyranny of relentless thought. “All my work is really about inner vision, about going inside yourself,” she notes. “For me, painting is about the human condition. I paint so I can experience that.”