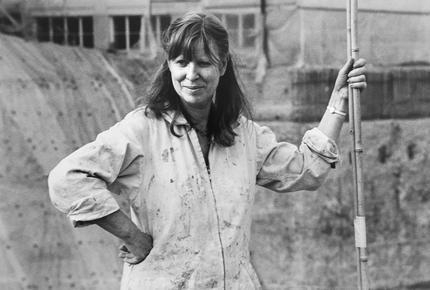 Lehmann Maupin is pleased to announce its representation of The Heidi Bucher Estate. Heidi Bucher was a Swiss artist best known for her innovative use of latex and her exploration of the physical boundaries between the body and our surroundings. Bucher’s practice can be considered an intricate process of historical preservation and metaphorical molting, which results in the poetic visualization of the complex relationship humans have with their bodies, their past, and the spaces they inhabit. Through this intensive investigation into the female body and domestic spaces, Bucher’s work seamlessly integrated two contemporaneous themes artists were grappling with during the 1970s and 1980s: the architecture of public and private spaces, and issues of femininity and the body.

“Her exploration of spaces—often designated as feminine, particularly domestic environments and objects—is very much in line with Lehmann Maupin’s programming and closely ties into the work of artists such as Do Ho Suh and Liza Lou,” says gallery director Anna Stothart. “Bucher is a significant female sculptor aligned with the work of artists such as Eva Hesse and Rachel Whiteread.”

Beginning in the 1970s, Bucher embalmed used clothing in a mixture of latex and mother-of-pearl, preserving these objects as artifacts of their time, and creating a surface that appeared skin-like in both color and texture. Bucher primarily worked with women’s clothing used to adorn or protect the female body, such as nightdresses and pantyhose, as a critical response to the rigid gender restrictions she experienced during her childhood and adolescence. By the end of the decade, Bucher began applying her signature latex medium to the surfaces of domestic objects and spaces, aligning women’s clothing with sites often designated as “feminine.” Bucher allowed the material to harden and then peeled it off, producing translucent skins that held elements of paint, rust, dirt, and the minute details and markings of these historically loaded domestic environments.

During the following years, Bucher produced a major body of work based on the domestic sites of her past—her ancestral house in Winterthur, the study in her parents’ home, and her studio in Zurich. Each space she inhabited was rendered translucent and ghostly, like a visual memory that, due to the nature of the material, would warp and discolor over time. Displayed suspended midair, the series of latex Raumhäute (Roomskins) are simultaneously monumental and fragile, mimicking the very process in which these works are created; the removal of the latex required both a great deal of physical strength and delicate dexterity.

In his essay on the occasion of the Swiss Institute’s Heidi Bucher exhibition in 2015, director Simon Castets classifies Bucher as “… an important pioneer and crusader in the feminist dialogue of the seventies in Switzerland.”

Bucher’s work is currently included in the group exhibition Women House, on view at the National Museum of Women in the Arts in Washington, D.C., through May 28, 2018, which challenges conventional ideas about gender and the domestic space. Additionally, Bucher’s work is included in the group exhibition The House of Fame at Nottingham Contemporary, through June 24, 2018. In fall 2018, running concurrently with the Frieze London art fair, Parasol Unit in London will have a retrospective of her work, on view from September 9—December 2, 2018. Bucher’s first show with the gallery is planned for spring 2019.