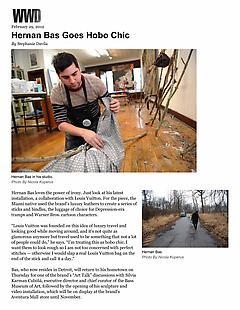 Hernan Bas loves the power of irony. Just look at his latest installation, a collaboration with Louis Vuitton. For the piece, the Miami native used the brand’s luxury leathers to create a series of sticks and bindles, the luggage of choice for Depression-era tramps and Warner Bros. cartoon characters.

“Louis Vuitton was founded on this idea of luxury travel and looking good while moving around, and it’s not quite as glamorous anymore but travel used to be something that not a lot of people could do,” he says. “I’m treating this as hobo chic. I want them to look rough so I am not too concerned with perfect stitches — otherwise I would slap a real Louis Vuitton bag on the end of the stick and call it a day.”

Bas, who now resides in Detroit, will return to his hometown on Thursday for one of the brand’s “Art Talk” discussions with Silvia Karman Cubiñá, executive director and chief curator of the Bass Museum of Art, followed by the opening of his sculpture and video installation, which will be on display at the brand’s Aventura Mall store until November.

Speaking from his adopted hometown several weeks before the Miami opening, Bas displays the sense of satire that has made him celebrated in the art world. (He has a solo show in New York at Lehmann Maupin Gallery opening March 15.) For the video installation, the artist shot a male model traversing through the woods with a stick and bindle over his shoulder. Instead of wearing rags, the model is dressed in Louis Vuitton. He favors a bottle of Moët over a flask.

“I like the play on words: runaway and runway,” Bas says.