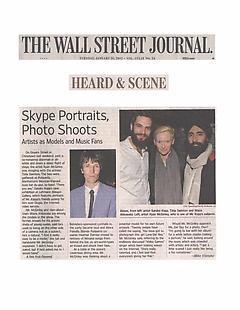 On Doyers Street In Chinatown last weekend, past a no-nonsense doorman In all white and down a steep flight of steps, the artist Ryan McGinley was mingling with the actress Tilda Swinton. The two were gathered at Pulqueria, Manhattan's Mexican-themed buzz bar du jour, to toast "There you are," Sandro Kopp's new exhibition at Lehmann Maupin Gallery, which features portraits of Mr. Kopp's friends posing for him over Skype, the Internet video service.

Mr. McGinley and man-about-town Waris Ahluwalia are among the models in the show. The former, known for his artistic shots of young nudes, said he's used to being on the other side of a camera; but as a subject, he's a natural. 'I find It really easy to be a model," the tall and handsome Mr. McGinley explained. 'I didn't have to get naked, but If he'd asked me to I would have!"

A few fruit-flavored, Belvedere-sponsored cocktails in, the party became loud and dance friendly. Blonde Pulqueria co-owner Heather Tierney moved to remixes of Nirvana songs from behind the bar, as art-world-types air-kissed and shook their hips.

At a table in the space's cavernous dining area, Mr. McGinley was thinking about a potential model for his own future artwork. 'Twenty people have called me saying, 'You have got to photograph this girl Lana Del Rey," Mr. McGinley said, referring to the endlessly discussed 'Video Games' singer who's been making waves on the Internet. 'She's really talented, and I feel bad that everyone's giving her flak."

Would Mr. McGinley approach Ms. Del Rey for a photo, then? "I'm going to live with her album for a while before maybe making a portrait" he said, looking around the room, which was crowded with artists and actors. "I get a little scared! I just really like being a fan sometimes."