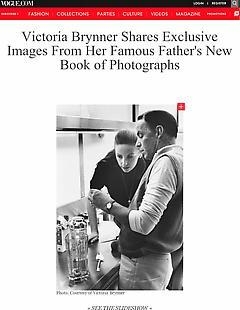 When your parents spent their weekends lighting fireworks with Frank Sinatra, Richard Burton taught you how to drive, and Karl Lagerfeld is someone you’ve known since you were eight—such was the life of Victoria Brynner, daughter of actor Yul Brynner—it’s likely that your family photo album would be of interest to anyone curious about what “famous” looked like in the fifties and sixties.

Now, on the 25th anniversary of her father’s death, Brynner has published many of her father’s unforgettable photographs in her new book, Yul Brynner: A Photographic Journey. The book is a collection of the intimate moments of an era’s most recognizable faces—Grace Kelly, Dean Martin, Ingrid Bergman, Salvador Dali, Charlton Heston, for example—all captured in the in-between times of life, after the director yelled “Cut!” or while lounging poolside in the privacy of a gated residence.

Brynner, herself a photographer (her father gave her her first camera), wanted to introduce the world to the other side of her famous father, who was best known for his title role in the stage and screen versions of The King and I and for his role in The Ten Commandments—and was often seen on set with at least three cameras hanging around his neck. “I don’t think he realized how important his work was,” Brynner says. “And like a good wine, it has aged very well. Now the pictures have historical significance in terms of lifestyle and film, in addition to the fact that they’re of amazing photographic quality.” A selection of the images goes on display at a reception and book signing on Sunday, September 12, at the Lehmann Maupin gallery. Before the opening, Brynner shared some exclusive images with Vogue.