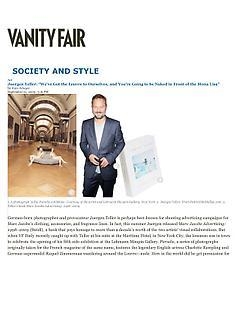 Juergen Teller: "We've Got the Louvre to Ourselves, and You're Going to be Naked in Front of the Mona Lisa"
By Kate Scheyer

German-born photographer and provocateur Juergen Teller is perhaps best-known for shooting advertising campaigns for Marc Jacobs's clothing, accessories, and fragrance lines. In fact, this summer Juergen released Marc Jacobs Advertising: 1998–2009 (Steidl), a book that pays homage to more than a decade's worth of the two artists' visual collaborations. But when VF Daily recently caught up with Teller at his suite at the Maritime Hotel, in New York City, the lensman was in town to celebrate the opening of his fifth solo exhibition at the Lehmann Maupin Gallery. Paradis, a series of photographs originally taken for the French magazine of the same name, features the legendary English actress Charlotte Rampling and German supermodel Raquel Zimmerman wandering around the Louvre—nude. How in the world did he get permission for the shoot? Herewith, we find out.

VF Daily: How did the Paradis show come about?

Juergen Teller: I'd been talking to my gallery, and I was meant to have a show in six months' time. Suddenly, a window opened up—I think one artist didn't finish his work—and they said, Hang on a minute, what about if we push it forward? And I thought, [The Paradis spread] is a complete show already. So it was pretty easy.

Why did you decide to pair Charlotte and Raquel? I know you've worked with both of them before.

I've been working with Charlotte for many years—12 years or something like that—and for the past two years or so we've been thinking about doing some nudes. A concept hadn't quite developed, something that both of us felt comfortable doing, it hadn't quite clicked. And then she had dinner with me in London, and I showed her a series of nudes I did of Raquel at my mum's house, and she was so impressed. I've become a close friend with Raquel, so it made sense that we'd pair the two together. It was great to have that age gap.

Back up. You shot Raquel Zimmerman nude at your mom's house?

[Raquel] is such a sweetheart, and super-professional. I wouldn't take just anyone to my mum's house. That's a weird thing, in general terms, going home to your mum's place. Who do you take? She could also relate to all that German stuff. She has German roots. Zimmerman, you know, is German.

And how did the Louvre come into it?

I got a phone call from the publisher of Paradis, and he said, "Hey, what do you think, do you want to do some pictures, some nudes, at the Louvre?" And I said, "Yeah right. That's gonna happen. Put the phone down." It was never gonna happen, right? The next day, he asked, "Have you thought about who you want to take to the Louvre?" I really thought it was a joke. I said, "That's not gonna happen." And he said to me, "There's just one good thing about getting older: you get connections."

So he knew someone who could get you in?

Yeah. So I said to Charlotte, "I think it's time to take your clothes off." "What do you mean?" I said, "Well, we've got the Louvre to ourselves, and you're going to be naked in front of the Mona Lisa." And she says, "Oh, I guess I have to do it then."
On the Eurostar on my way to Paris, I still thought it was not going to happen. I spent a whole day researching where I wanted to take the pictures, walked for miles and miles and miles. I had from 6 o'clock to 12 o'clock in the night, and I had to be very specific, very precise, as to where I wanted to take the pictures. Because then they were going to, for privacy, switch off the security cameras. So I had to be very precise, like, O.K., from seven to eight I'm going to be in this room, and then in that room, and then in that room.

There's such a German feel to your work.

Well, it's funny. In Munich, there's a park called the English Garden, and in the summer, in the park, which is like Central Park, people walk around naked. Everyone hangs around totally naked. And I grew up walking around naked at home, when I was a child. We had a sauna and a swimming pool. And when I got to England, I thought, Everyone is so weird about their bodies. And you meet a girl, and you spend a night with her together, you know, sex, and she gets up, and puts a robe on. And I thought, What the fuck's going on now? Bizarre.

[Long pause.] You know, I'm just concerned about myself, really. To get [my work] right. Not really that concerned with what somebody else is doing. I like Ryan McGinley's work.

Sometimes there is a voyeuristic aspect to your work, and other times you're a very active participant, like the times you've photographed yourself alongside subjects for Marc Jacobs campaigns.

I'm definitely not a voyeur. I'm definitely involved, very strongly. It's a real collaboration. I need that, to know who my subject is. If I do a portrait or a fashion story, if it's of a funny guy, or a serious guy, or a melancholy guy, then that picture will be as that person is, I believe. And I wouldn't ask someone to behave in a way which would be out of character. For example, for the Marc Jacobs ads, the model Natasa [Vojnovic]—she's extremely extroverted, and sort of mad, so I would use that, of course. And I wouldn't ask Irina [Kulikova] to act in a way I wouldn't think would be appropriate for her. For me it's important to have—it sounds like a stupid English word, but—an adventure. It's a performance. When we did these pictures with Raquel, for the Marc Jacobs ads, in Venice, there's a reason it was Venice. There's a reason for everything. Going on the boat, to the island, seeing it, eating Italian food. Everything is important. And everything goes into the picture. Even if you don't actually see it, it's important.

You've done a castle, you've done the Louvre. There's no real comparison in the United States for those kinds of locations, is there?

Well, you've got Las Vegas. I did [a shoot there] for W. Five or six years ago. I really didn't like it. I couldn't handle it. The whole thing was just not quite right. The best thing about your country is the countryside. I remember with Venetia [Scott, Marc Jacob's stylist and Teller's ex-wife] going camping in California, going to Yosemite, and Big Sur. And I did a shoot in Washington, D.C.—what a bizarre place that is.

What are you craving next?

A good night's sleep! I am busy. I have another show coming up in Nürnberg, in the Kunsthalle, and that's kind of a homecoming for me. It's very important for me, because that's where I come from. My mum's going to be there, and my whole family, and the neighbors. It's quite a big museum, seven different rooms. I'm going to be busy. [To an assistant:] Fuck, we're going to be busy.

Is that how you stay constantly inspired? You're constantly moving, seeing new things, new people.

Yeah, always one thing leads to another. That's why I like doing portraits, and stuff for myself, that might lead to a fashion story, which leads to something else. I wouldn't want to be doing just fashion work. I like all of it.