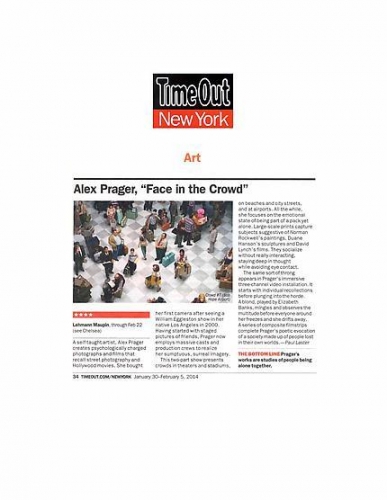 Alex Prager: "Face in the Crowd"
By: Paul Laster


A self-taught artist, Alex Prager creates psychologically charged photographs and films that recall street photography and Hollywood movies. She bought her first camera after seeing a William Eggleston show in her native Los Angeles in 2000. Having started with staged pictures of friends, Prager now employs massive casts and production crews to realize her sumptuous, surreal imagery.


This two-part show presents crowds in theaters and stadiums, on beaches and city streets, and at airports. All the while, she focuses on the emotional state of being part of a pack yet alone. Large-scale prints capture subjects suggestive of Norman Rockwell’s paintings, Duane Hanson’s sculptures and David Lynch’s films. They socialize without really interacting, staying deep in thought while avoiding eye contact.


The same sort of throng appears in Prager’s immersive three-channel video installation. It starts with individual recollections before plunging into the horde. A blond, played by Elizabeth Banks, mingles and observes the multitude before everyone around her freezes and she drifts away.


A series of composite filmstrips complete Prager’s poetic evocation of a society made up of people lost in their own worlds.