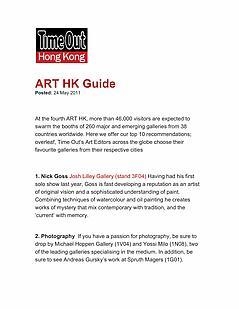 HONG KONG— Boasting 260 galleries from 38 countries, the fourth edition of the much-expanded Hong Kong International Art Fair — aka Art HK 11 — held its sparsely attended VIP preview this afternoon at the city's waterfront convention center. Though the names may not sound familiar to the local population, top-drawer galleries ranging from New York's Gagosian and Marian Goodman to Paris's Thaddaeus Ropac and London's White Cube signed on this year in hopes of catching some of the newly minted Asian wealth.

There has also been a nonstop buzz about the growing status of the fair since the announcement just weeks ago that the big daddy of art-fair organizers, Basel's MCH Group, organizers of the Art Basel and Art Basel Miami Beach fairs, purchased for an undisclosed sum a sixty percent controlling stake in Asian Art Fairs Ltd., the owners of Art HK. Next year's ART HK will reposition itself with an early February schedule, midway between Art Basel Miami Beach in December and Art Basel in June.

But beyond that striking development, as well as the multibillion-dollar project underway to build the M+ contemporary art museum and surrounding cultural district in nearby West Kowloon, the overwhelming success of the Hong Kong venue, which has grown into the most important Asian art fair in just four years, compelled Western galleries to take the plunge.

"My expectation is to meet some of the Chinese collectors, but it's not so easy," said London and Munich dealer Monika Sprüth of Sprüth Magers. "We have no Chinese artists so it's complicated. It would take a lot of time to find the right Chinese artists on the same level as our Western artists."

In the first few hours of the preview, the dealer sold Andreas Gursky's large-scale Grand Prix pit-stop photograph "Ferrari II" from 2007, number three from an edition of four, to a European collector for €500,000 ($700,000). "We could have sold this piece anywhere," noted Sprüth, who said she sold it to a collector she already knew. "But we wanted to concentrate on a few artists here."

New York's Sperone Westwater featured Chinese star Liu Ye in its booth, and quickly fielded significant interest in the artist's "Once Upon a Time in Broadway," a 2006 homage to Piet Mondrian's iconic "Broadway Boogie-Woogie." Liu's version was priced at $2 million. So far, the gallery sold the artist's "R," a 2009 print from an edition of 60, for $15,000. The work is part of Liu's battleship series, this one featuring a huge warship seen through red curtains as a small boy in a sailor suit looks on.

"There's a lot of interest percolating," said David Leiber, a gallery partner, "but the big Asian buyers art not from Mainland China. I've been speaking with people from Indonesia, Malaysia, and Taiwan."

Elsewhere, there was early, modestly priced action at New York and Shanghai's James Cohan Gallery, with Guo Hongwei's sweet 2010 watercolor "A Study for Shirley Temple Series" selling to a Chinese collector for $5,000, and Tony Oursler's "De-Doublement," an early piece from 1996 composed of two dolls, a shelf, a projector, and a tripod, going to an Australian collector for $40,000.

The gallery also sold Japanese artist Tabiamo's Chinese-ink-on-Japanese-paper composition of elaborately depicted interlinked hands, "Tawamushi (13)," for in the $7,000 range. Tabiamo will be representing Japan in the upcoming Venice Biennale.

Strolling along the generously proportioned aisles and industrial-strength concrete floors, you could barely tell it was an Asian fair, apart from some booths that went to the trouble of putting up bilingual wall labels.

Familiar fair and art-world faces blurred any sense of geography. In a scene that could have been glimpsed at any of the world's major fairs, for instance, Phillips de Pury chairman Simon de Pury power-walked through the space of New York gallery Gavin Brown's Enterprise, which featured new works by Alex Katz and Rikrit Tiravanija, among others. For his part, Tiravanija contributed a dynamic suite of eight glazed ceramic portrait reprises of Andy Warhol's "Mao" called "Untitled 2011 (Import Export)," priced at $250,000. So far there weren't any takers, but the suite of palladium-luster patinated heads threw plenty of wall-power.

"The fact that Basel has bought into the fair brings a big boost and gives an indication of the strength of the art market here," observed de Pury, sporting his ever-present camera. In fact, de Pury said, he is shopping for a Phillips de Pury venue in Hong Kong for a first-time auction here sometime later this year or early next. He declined to go into further detail.

Big-name Japanese art certainly seemed in favor, as evidenced by the work's hearty reception at Paris-based Emmanuel Perrotin Gallery. Perrotin sold Takashi Murakami's "Open Your Hands Wide," a giant two-panel acrylic-on-canvas painting from 2010, mounted on an aluminum frame, for $2.2 million to a European collector. Meanwhile, a small-scale Murakami in acrylic and platinum leaf on canvas, appropriately titled "An Homage to IKB, 1957," sold in the region of the $300,000 asking price.

The gallery also sold two large canvases by Murakami disciple Mr.: "Title to Be Determined" (2011) for $175,000, and the four-panel "Desire" from the same year for $240,000. Both works encapsulated Mr.'s lewdly childish vocabulary of little girls, flowers, and gum drops, set against an exotic background of rich foliage.

Another familiar face circulating the aisles — and making you feel like you were in London, Basel, or Miami — was Brett Gorvy, Christie's newly appointed worldwide head of postwar and contemporary art, flanked by New York Warhol dealer Alberto Mugrabi.

"It's a surprisingly good fair," observed Gorvy, "and they're making a serious effort. Right now, it's more about educating the public here as much as anything else. But it's going to be quick in moving from collecting just Chinese contemporary to Western art." Clearly, auction houses are hoping that the specialist's prediction will come true, opening the floodgates of a market bonanza.

Speaking about top-flight dealers who signed up for this edition, Gorvy expressed what many dealers indicated: "The big names came because they all heard it was the foothold. They're obviously trying to meet new people. You need an art fair to have a public face in order to reach new markets."

Arne Glimcher, the founder and head of Pace Gallery, which established a big branch in Beijing in 2008, was one such big name. "The fair has been very successful for us," he said. "I sold Zhang Xiaogang's 'Slumber No.4' from 2011 to a Korean for $600,000 and a small Zhang Huan ash-on-linen 'Clock' from 2011 for around $100,000 about ten minutes ago." The latter work, featuring a young Asian girl with folded hands, exuded a quiet piety, much like the material of the accumulated ash allegedly gathered from burnt incense from Chinese monasteries.

Glimcher is very bullish on Asia, and China in particular. "They're wide-open and interested to learn, but not so interested as yet in Western Art," said the dealer, who recently celebrated his 50th year of dealing under the Pace moniker. "They own the 21st century and are very optimistic. It reminds me of America in the '60s when that kind of enthusiasm and optimism led to so much buying of American art."

One of the most surprised of the first-time dealers here was David Zwirner, who experienced a near-perfect storm of interest for the art he brought over. That included paintings made specially for the fair, such as Luc Tuyman's large-scale, 87 ½-by-62 ¼-inch oil-on-canvas "Couple," an uncharacteristically sweet 2011 painting depicting two birds on a tree branch that sold for approximately one million dollars.

"We sold a bunch of stuff — what more do you want when you do an art fair?" said Zwirner, who noted that all of the buyers were Chinese collectors. "I would say mission accomplished." He also sold Yan Pei-Ming's powerful "Self-Portrait" from 2011 for $400,000, and Daniel Richter's "Tuwenig," an exotic 2004 composition of a top-hatted circus performer surrounded by a large pack of dogs, for $700,000. On the younger side, the gallery also sold the Algerian-born and red-hot Adel Abdessemed's trio of Murano-glass-fabricated microphones, titled "Fatalité," for $220,000.

While a number of dealers grumbled at the absence of action, clearly commerce was making waves.

Two separate sections that are bivouacked on an upper floor here, Art Futures and Asia One, represent a further expansion of Art HK 11 by showcasing more local Asian art, decidedly on the emerging side. The former consists of 45 galleries and the latter 47, adding 92 booths to the 168 mainstream stands on the main floor (The new Asian sections will be covered in another report.)

Finally, one of the best perks found are the stunning views of Hong Kong harbor, literally a stone's throw from what hopes to be more hardcore art commerce.