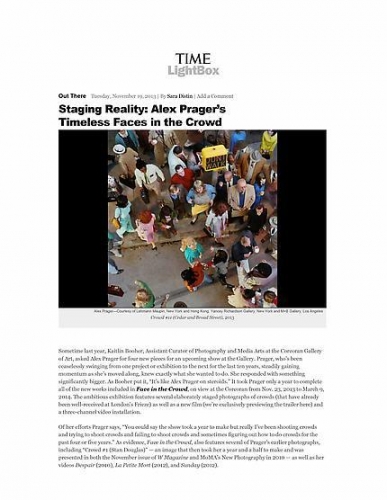 
Sometime last year, Kaitlin Booher, Assistant Curator of Photography and Media Arts at the Corcoran Gallery of Art, asked Alex Prager for four new pieces for an upcoming show at the Gallery. Prager, who’s been ceaselessly swinging from one project or exhibition to the next for the last ten years, steadily gaining momentum as she’s moved along, knew exactly what she wanted to do. She responded with something significantly bigger. As Booher put it, “It’s like Alex Prager on steroids.” It took Prager only a year to complete all of the new works included in Face in the Crowd, on view at the Corcoran from Nov. 23, 2013 to March 9, 2014. The ambitious exhibition features several elaborately staged photographs of crowds (that have already been well-received at London’s Frieze) as well as a new film (we’re exclusively previewing the trailer here) and a three-channel video installation.


Of her efforts Prager says, “You could say the show took a year to make but really I’ve been shooting crowds and trying to shoot crowds and failing to shoot crowds and sometimes figuring out how to do crowds for the past four or five years.” As evidence, Face in the Crowd, also features several of Prager’s earlier photographs, including “Crowd #1 (Stan Douglas)” — an image that then took her a year and a half to make and was presented in both the November issue of W Magazine and MoMA’s New Photography in 2010 — as well as her videos Despair (2010), La Petite Mort (2012), and Sunday (2012).


In all of Prager’s works, her characters are carefully costumed, donning outfits that span from mid-century to present day. Any sense of real time is immediately displaced, distorting the pictures’ distance from the present as well as the characters’ space from each other. While their gazes are deliberate, they often don’t make eye contact with anyone else within the frame. The images are, as described by both Prager and Booher, not quite real and not quite fake, which gives us freedom to enter them ourselves. And this part is important. While they don’t commit to one time period or another, Prager’s crowds are very much about the world we’re living in right now.


But Prager also says, “it’s not like recreations of real crowds. These are forced.” She continues, “I mean that’s what I get from it. I also don’t really like to tell people what to get from the pictures.”


Don’t be fooled by her seeming ambivalence. Booher notes that Prager’s prowess as a director has increased over time and it’s definitely evident in her new work. While Prager is candid about the amount of post-production editing — saying: “If people got a little too happy and a little too connected, then I’ll separate them in post;” and laughing: “I like to keep it awkward”— the actual production was movie-sized. Prager’s direction extended to overseeing all aspects of costuming, hair, and make-up with an impressive level of attention to detail. For the new film, for the first time, she’s also ventured into dialogue, giving some characters scripts, others only prompts, and letting a few individuals improvise or tell their own tales.


While what’s true or not, we’ll never know, this part of the production was a highlight for Prager. She says, “It was amazing [to hear] the stories that came out of people with one little push or a nudge. It just got me thinking about the two sides of a crowd. It can be a massive sea of strangers that become this anonymous cloud in your way. Or it can be all hundreds of beautiful special little individuals with their own experiential tracks. I mean, it’s very obvious that that’s what a crowd is but when you dig into that and look for that, it’s really beautiful.”

www.time.com
Back to Top