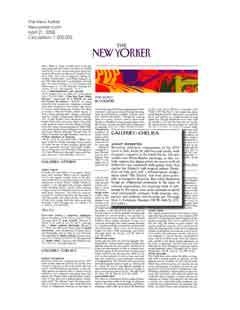 Bickerton embraces comparisons of his 1993 move to Bali, where he still lives and works, with Gauguin's sojourns in the South Pacific. His new works—not Photo-Realist paintings, as they initially appear, but digital prints on canvas with oil additions—are crammed with gaudy hues that update the Master's lush tropical palette. Depictions of hula girls and a hallucinogenic composition titled "The Dream" nod even more pointedly in Gauguin's direction. But, while Bickerton brings an enlightened awareness to the topic of cultural imperialism, his knowing wink is subsumed by his manic tone, as he attempts to spoof (and presumably critique) both smarmy neo-natives and schlocky tourist-trade art.