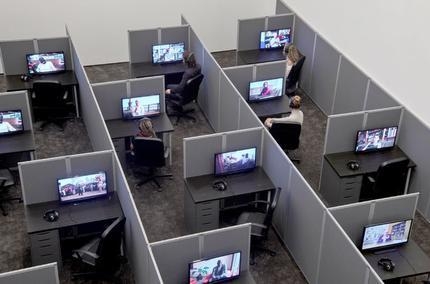 Kader Attia
by Will Heinrich

The title piece of this tremendously absorbing show, “Reason’s Oxymorons,” is an installation of 18 video monitors in semiprivate cubicles. Furnished in black-and-gray corporate chic, the cubicles run the length of the gallery in three rows, and each monitor plays a separate group of thematically organized snippets from nearly 30 interviews Mr. Attia conducted with doctors, academics and healers, from Paris to Dakar.

Depending on when you walk in and where you pause, you might catch the philosopher Souleymane Bachir Diagne comparing Nigerian televangelists to ancient devotees of the Roman goddess Fortuna; the ethnomusicologist Gerhard Kubik demonstrating the mind-altering effects of certain African rhythms on a thumb piano; or the historian Serge Gruzinski talking about “The Matrix.” Sitting down, you enjoy a kind of reverse psychoanalysis: as if a therapist were revealing herself or himself in an authentic but ostensibly one-way connection. But if you stand and look over the dividers, you might catch that face repeated on three or four different screens.

Even as Mr. Attia’s construction highlights the limits of Western psychology — making a sculptural metaphor of its narrow categories and loopy attempts at precision — it demonstrates how easily the truly human overwhelms any such attempt to contain it. Voices and music leaking from headphones make for a constant hum of background interference, and the varying length of the video loops, from 13 to 25 minutes, means that it is practically impossible to experience the installation the same way twice.

The New York Times
Back to Top