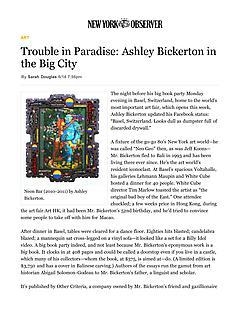 Trouble in Paradise: Ashley Bickerton in the Big City
By Sarah Douglas

The night before his big book party Monday evening in Basel, Switzerland, home to the world’s most important art fair, which opens this week, Ashley Bickerton updated his Facebook status: “Basel, Switzerland. Looks dull as dumpster full of discarded drywall.”

A fixture of the go-go 80’s New York art world—he was called “Neo Geo” then, as was Jeff Koons—Mr. Bickerton fled to Bali in 1993 and has been living there ever since. He’s the art world’s resident iconoclast. At Basel’s spacious Voltahalle, his galleries Lehmann Maupin and White Cube hosted a dinner for 40 people. White Cube director Tim Marlow toasted the artist as “the original bad boy of the East.” One attendee chuckled; a few weeks prior in Hong Kong, during the art fair Art HK, it had been Mr. Bickerton’s 52nd birthday, and he’d tried to convince some people to take off with him for Macao.

After dinner in Basel, tables were cleared for a dance floor. Eighties hits blasted; candelabra blazed; a mannequin sat cross-legged on a vinyl sofa—it looked like a set for a Billy Idol video. A big book party indeed, and not least because Mr. Bickerton’s eponymous work is a big book. It clocks in at 408 pages and could be called a doorstop even if you live in a castle, which many of his collectors—whom the book, at $375, is aimed at—do. (A limited edition is $3,750 and has a cover in Balinese carving.) Authors of the essays run the gamut from art historian Abigail Solomon-Godeau to Mr. Bickerton’s father, a linguist and scholar.

It’s published by Other Criteria, a company owned by Mr. Bickerton’s friend and gazillionaire artist Damien Hirst, who was his neighbor in Bali briefly. (“He hired a bodyguard,” Mr. Bickerton recalled affectionately.) Its eye-popping design is the work of Stefan Sagmeister, another buddy. (Mr. Bickerton calls him “Saggy.”)

For an iconoclast, Mr. Bickerton has lots of friends. It makes sense: the art world loves to poke fun at itself. Like any arch-serious court, it needs its jester, even if he’s available only part-time.

The Barbados-born Mr. Bickerton, a compact, wiry man, is youthful. In a British accent softened by years of travel, he speaks astutely, in a sort of staccato mumble. His springy gait and the glint in his eye give the impression he is always on the verge of making mischief.

When The Observer interviewed him in New York last month, he seemed at a crossroads. He had spent a lot of the money he’d made in the recent market boom on a spectacular house on the beach (its entrance gate is one of his elaborately carved artworks). He’d worked prodigiously to produce the pieces—hybrid painting/photographs—at Lehmann Maupin.

He hadn’t been surfing enough. “The other surfers surf much more than I do,” he lamented. “I’m always worried about working.”

His new work is dark. Gone are the idyllic scenes of a few years ago—the dewy fecundity, the voluminously pregnant women, the cherubic babies. In their place are neon-lit bars; obese tourists plopped on bar stools; tattooed whores with reptilian eyes; kids (his own were kind enough to model) who look like zombies.

Mr. Bickerton was brooding. “Usually the gallery schedules my entire time here,” he told The Observer. “This time I’m pretty much on my own.” He gazed around at the patio of the Maritime Hotel, where he’d just ordered a coffee, a lemonade and a coke.

He’d been up until daylight at a party for the young artists Nate Lowman and Aaron Young. He’d stopped by Mary Boone’s dinner for the painter David Salle, whose limelit 80’s paralleled Mr. Bickerton’s. “I preferred Salle’s party,” he said. “The really famous grizzled heads.”

Mr. Bickerton is the quintessential outsider insider. Not to be confused with an insider outsider—some self-taught type who insinuated his way into art’s inner sanctum. (He went to Cal Arts.) People compare him to Gauguin, who fled to Tahiti; he doesn’t like that. He still exists within the art world; the crests and troughs of his career are still determined by its exigencies. He simply lives at a far remove.

Just maybe not as far removed: fairs like Art HK are bringing the art world east. And then there’s the Internet. Mr. Bickerton may have fallen a bit out of touch, but “now, he knows as much as anyone else who’s living in New York,” observed his onetime Williamsburg neighbor, artist Jon Kessler, who visited Lehmann Maupin on a recent Saturday.

“I could never live in New York again,” Mr. Bickerton said, walking through Chelsea. “You have to go to your assistant’s opening. And your assistant’s boyfriend’s opening. I’d never get anything done.” He added, “I have a clause in my contract. I can’t be below 70 degrees.” New York is “a low-roof, gray, concrete parking structure that goes on for infinity.” And yet it was impossible not to detect a hint of nostalgia in his voice. Later he said, “Bali is like a toilet that doesn’t flush but has had a bottle of perfume dumped in it.”

Mr. Bickerton was on a plane to New York for his show when news broke that Osama bin Laden had been killed. Usually he flies direct, but this time he had a stopover in the Doha airport, where, three Xanaxes into his voyage, he staggered over to a set of TV monitors blaring the breaking story.

“I looked around, and thought, I have to do this once in my life. I said, ‘America, fuck yeah!’ People didn’t know whether to laugh or be angry.”

“You don’t really believe that, do you?” The Observer asked.