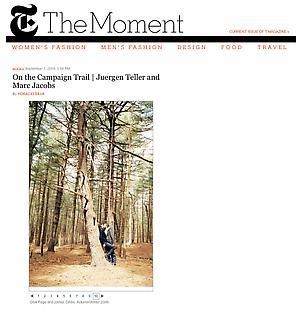 Marc Jacobs's impending nuptials to Lorenzo Martone isn't the only marriage he's celebrating. Next week's United States publication of "Marc Jacobs Advertising 1998-2009 by Juergen Teller" ($120, Steidl) marks one of the longest standing creative unions in fashion. The Moment caught up with Teller to talk about his collaboration with Jacobs on the ads for the designer's namesake collection.

Q. How did you and Marc first meet?

A. I've known Marc since he and his business partner Robert Duffy visited us in London a little over 11 years ago. I was living with my ex-wife Venetia [Scott], and he was very keen to have her style the shows and work on the collection. But we had just had our first baby — Lola was three weeks old — and Venetia turned it down because she thought that it was impossible to work so soon after Lola's birth. But they were very pleasant, and when Venetia finally took the job they were very accommodating with breast-feeding and what have you and we all quickly became friends.

And the first ad with Kim Gordon from Sonic Youth — how did that come about?

Marc was also friends with Sonic Youth, and when they went on a tour Kim wanted to wear one of his dresses onstage. Marc was flattered and said, "You know, Joe McKenna is doing this magazine and maybe we can put an ad of it in it." And in those days there wasn't money involved, but I liked Sonic Youth and was very keen to meet them and go to their concert. That's the only shoot in the whole book that's not art-directed and very precise. I usually require a lot more control, but I was basically in front of the stage with the rest of the crowd and it was more a reportage sort of thing.

I'm always fascinated by the seemingly random bunch of creative people who appear in the ads, from models to musicians like Stephen Malkmus to artists like Cindy Sherman.

Do you ever use a casting agent?

No, it just happens organically. It's basically people we know or admire. As friends, we talk about films and shows we've seen. Or someone will mention that they just had dinner with Cindy Sherman and then one of us will be, "Why not use her for a campaign?" That's basically how it happens.

Does Venetia style the ads? If so, what's it like working with your ex-wife?

Venetia's not really involved in the campaigns that much. I've been pretty much doing them on my own, and she is much more heavily involved with designing and styling the clothes with Marc. Obviously we all discuss who and how we should do, but it has always pretty much been left up to me, which is a great freedom I got from Marc.

Possibly. [Laughs] I find with a campaign it's just easier to do it yourself. You're obviously careful to make sense of the looks, but there's no real "styling" involved as that part of it is already done by the time I shoot it.

Describe the creative process with Marc.

I go to N.Y.C. a couple of days before the show to see the fittings and see the clothes on the hanger, and to get a feel of what is to come — the scenario, the music, the vision — and then I digest it and talk about it with Marc. Sometimes it's immediate, and other times it takes a lot more back and forth between us. It's very much a collaboration of how we both feel, and we have enough common ground by now to come to an understanding. But he is not offended if he has an idea and I am not feeling it.

What are some of your favorite ads?

For egotistical reasons, I would have to say the naked ones with Charlotte Rampling. That was fun, a real adventure, and I also put myself on the line.

You guys had worked together before, no?

Yes, she's been a close fiend of mine since I photographed her for Libération about 12 years ago. I was terrified and at the same time very excited to meet her. She was a bit short with me, actually. You know, "I've got 10 minutes so where do you want to do it?" But I persuaded her to give me a couple of minutes so I could show her my first book, which I had recently published. She opened it up, looked very carefully at every page and then said, "O.K., now we can work. Take as long as you want."

What would you say has been the most controversial — the Rampling series, the series with Wilhelm Sasnal in which some of the images looked like he was in blackface or the ones with Dakota Fanning?

The Dakota ones caused nothing, and they are pretty hard-core. They are on the border of being too much, even for me. I don't remember hearing much about it, but if there was any controversy it was very under the radar. Funnily enough the most complaints were about the series with Dick Page and James Gibbs because they are a gay couple. Men's Vogue even refused to publish it. Dick is a very close friend of mine and I've known him for 20 years — he's been part of the Marc family for 20 years. And I like the idea of having a gay couple in a men's ad because it makes sense. And I wanted the ads to be like they are — very romantic, tender and sweet. I certainly didn't want to have anything provocative, not at all. The only other controversy that comes to mind also involved Vogue — the women's one — over an ad of a clothed Cindy Sherman and me in which I am grabbing her breasts. That caused a stir. Go figure.

All photographs from "Marc Jacobs Advertising 1998-2009? by Juergen Teller published by Steidl / www.steidlville.com