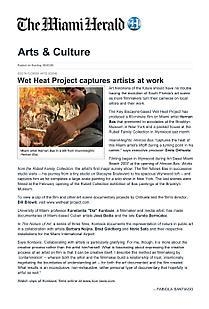 Art historians of the future should have no trouble tracing the evolution of South Florida's art scene as more filmmakers turn their cameras on local artists and their work.

The Key Biscayne-based Wet Heat Project has produced a 60-minute film on Miami artist Hernan Bas that premiered to accolades at the Brooklyn Museum in New York and a packed house at the Rubell Family Collection in Wynwood last month.

miamiHeights: Hernan Bas ''captures the heat of this Miami artist's liftoff during a turning point in his career,'' says executive producer Grela Orihuela.

Filming began in Wynwood during Art Basel Miami Beach 2007 at the opening of Hernan Bas: Works from the Rubell Family Collection, the artist's first major survey show. The film follows Bas in successive studio visits -- his journey from a tiny studio on Biscayne Boulevard to his spacious Wynwood loft -- and captures him as he completes a large-scale painting for a solo show in New York. The last scenes were filmed at the February opening of the Rubell Collection exhibition of Bas paintings at the Brooklyn Museum.

To view a clip of the film and other art scene documentary projects by Orihuela and the film's director, Bill Bilowit, visit www.wetheat project.com.

University of Miami professor Konstantia ''Dia'' Kontaxis, a filmmaker and media artist, has made documentaries of Miami-based Cuban artists José Bedia and the late Cundo Bermúdez.

In The Nature of Art, a series of three films, Kontaxis documents the representation of nature in public art in a collaboration with artists Barbara Neijna, Brad Goldberg and Norie Sato and their respective installations for the Miami International Airport.

Says Kontaxis: 'Collaborating with artists is particularly gratifying. For me, though, it is more about the creative process rather than the artist him/herself. What is fascinating about expressing the creative process of an artist on film is that it can be creative itself. I describe this method as filmmaking by `contamination' -- wherein both the artist and the filmmaker build a relationship of trust, intentionally negotiating the boundaries of understanding art -- for both the art documented and the film created. What results is an inconclusive, non-exhaustive, rather personal type of documentary that hopefully is artful as well.''