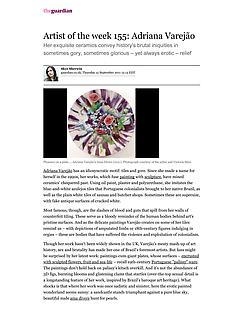 Artist of the week 155: Adriana Varejão
By Skye Sherwin

Adriana Varejão has an idiosyncratic motif: tiles and gore. Since she made a name for herself in the 1990s, her works, which fuse painting with sculpture, have mined ceramics' chequered past. Using oil paint, plaster and polyurethane, she imitates the blue-and-white azulejos tiles that Portuguese colonialists brought to her native Brazil, as well as the plain white tiles of saunas and butcher shops. Sometimes these are supersize, with fake antique surfaces of cracked white.

Though her work hasn't been widely shown in the UK, Varejão's meaty mash-up of art history, sex and brutality has made her one of Brazil's foremost artists. But fans might be surprised by her latest work: paintings-cum-giant plates, whose surfaces – encrusted with sculpted flowers, fruit and sea-life – recall 19th-century Portuguese "palissy" ware. The paintings don't hold back on palissy's kitsch overkill. And it's not the abundance of 3D figs, bursting blooms and glistening clams that startles (over-the-top sexual detail is a longstanding feature of her work, inspired by Brazil's baroque art heritage). What shocks is that where her work was once sadistic and sinister, here the erotic painted wonderland seems sunny: a sandcastle stands triumphant against a pure blue sky, beautiful nude ama divers hunt for pearls.

Why we like her: For her Saunas and Baths paintings, which depict serene tiled interiors in pallid hues. The harmonious interiors might recall Renaissance fantasy architecture, and the tiles suggest modernism's love of grids, but what bloody horrors are lurking behind the tranquil exterior?

A tale of two cities: Varejão's art looks to the past, but she has said that the extreme contrasts of contemporary Rio, from the iniquity of its favelas to its lavish apartment blocks, are a major influence.