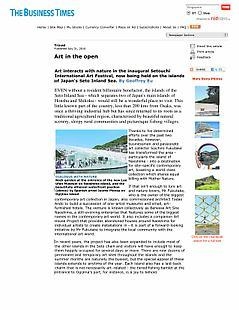 Art in the open
Art interacts with nature in the inaugural Setouchi International Art Festival, now being held on the island of Japan’s Seto Inland Sea
Geoffrey Eu

Even without a resident billionaire benefactor, the islands of the Seto Inland Sea - which separates two of Japan's main islands of Honshu and Shikoku - would still be a wonderful place to visit. This little known part of the country, less than 200 kms from Osaka, was once a thriving industrial hub but has since returned to its roots as a traditional agricultural region, characterised by beautiful natural scenery, sleepy rural communities and picturesque fishing villages.

Thanks to his determined efforts over the past two decades, however, businessman and passionate art collector Soichiro Fukutake has transformed the area - particularly the island of Naoshima - into a destination for site-specific contemporary art, boasting a world-class collection which shares equal billing with Mother Nature.

If that isn't enough to lure art and nature lovers, Mr Fukutake, who is the owner of the biggest contemporary art collection in Japan, also commissioned architect Tadao Ando to build a succession of one-artist museums and small, art-furnished hotels. The venture is known collectively as Benesse Art Site Naoshima, a still-evolving enterprise that features some of the biggest names in the contemporary art world. It also includes a companion Art House Project that provides abandoned houses around Naoshima for individual artists to create installations in - it is part of a forward-looking initiative by Mr Fukutake to integrate the local community with the international art world.

In recent years, the project has also been expanded to include most of the other islands in the Seto chain and visitors will have enough to keep them happily occupied for several days or more. There are now dozens of permanent and temporary art sites throughout the islands and the summer months are naturally the busiest, but the special appeal of these islands extends to anytime of the year. Each island also has a laid-back charm that is not necessarily art-related - the tiered fishing hamlet at the entrance to Ogijima's port, for instance, is a joy to behold.

Japanese artist Mariko Mori's installation site on Teshima was reached via a trek up a muddy slope in a remote bamboo forest. Her glowing fiberglass artwork, named for an ancient Celtic stone, was immersed in the middle of a small forest lake. The effect is magical and most impressive at sunset, so visitors are advised to come with torch lights and galoshes.

Another installation on Teshima by Janet Cardiff and Georges Bures Miller transformed a traditional wooden house into a stormy special effects set, complete with pouring rain and thunder and lightning. Argentinian artist Leandro Erlich turned a house on Megijima into one of his famed mirror-image sets, where what you see isn't necessarily what you get. Meanwhile, New York-based Korean artist Do Ho Suh was inspired by a humble fisherman's net for his piece Network, on a remote beach on Shodoshima island.

'There are so many art festivals around, but this one is different,' says Atsuko Koyanagi of Gallery Koyanagi in Tokyo, where Mr Fukutake's aversion for the big city is well known. She explains that the art island concept was in part a response to the erosion of local culture, but the museums he built also isolated the people from the art, so he developed the so-called House projects to bring art to the people instead.

'That's why the people living on the islands are so positive about the festival,' she says. 'His attitude is completely different from the big companies - he really cares, he speaks the local dialect, he knows how to capture the hearts of the old people living here.'

Bringing art to the outside world where it interacts with the natural environment is the way of the future, according to Fumio Nanjo, director of the Mori Art Museum in Tokyo. 'Art is no more in the white cube - it should be in specific sites where it creates more meaning,' says Mr Nanjo, who was also the artistic director of the Singapore Biennale in 2006 and 2008.

He adds: 'Here, it's a dialogue, a juxtaposition between nature and art. In Singapore in 2006, I had this kind of thing in mind when I tried to spread the locations of the works.' Despite the general feel- good vibe at Setouchi, Mr Nanjo was disappointed with the quality of some of the works by lesser names. 'It's difficult to reach the artworks and the quality is mixed - you really have to know which ones to see.'

Artist Leandro Erlich was impressed with what he saw. 'It's very interesting to try new ways to revitalise a region through art and to have a goal of interaction with the local community - it gives a new purpose to art,' he says. 'The festival has a social consciousness in an area which is far from the big cultural centres.' He adds: 'I think art becomes less predictable and more meaningful in this context - it's an opportunity for artists to make dreams real.'

Given his less-than-subtle bias against Tokyo, Mr Fukutake's main purpose is to take culture out of urban centres, says gallery owner James Cohan of the James Cohan Gallery in New York. 'You don't have to be in a big city to have a world-class cultural experience,' says Mr Cohan. 'Culture is more and more about destinations, taking yourself outside the metropolitan area, being in a relaxed state.'

He adds: 'It's almost like we need to find ourselves in some kind of isolation to take new things in - your senses are heightened because you're outside your everyday thing.' What Mr Fukutake has done for the region is similar to how the Guggenheim Museum helped to draw visitors and reinvigorate Bilbao in Spain, says Mr Cohan, who refers to it as 'The Bilbao Effect'.

The Setouchi festival is a case of making your hardware work for you. The relative isolation of these islands and the remoteness of its artworks add a powerful dimension to what is already a unique experience. Integrating the natural environment and traditional life and culture of an area with top-quality contemporary art and architecture is a bold idea and no small undertaking, but Mr Fukutake has shown that he has the will - and the finances - to pull it off.

Meanwhile, he is continuing to build more museums and bring more art to the Seto islands. An Ando-designed museum for Korean artist Lee Ufan opened on Naoshima in June while later this year, a new museum - a collaboration between the artist Rei Naito and the architect Ryue Nishizawa (a co-founder of architecture firm SANAA, which has already made an imprint on the islands) - will open on Teshima.

'Normally, collectors prefer to keep the art to themselves, but he (Mr Fukutake) likes to share it with the public,' says Masami Shiraishi, owner of SCAI The Bathhouse gallery in Tokyo. 'He seeks first-rate art and also encourages the local community to interact. We all appreciate great art - I live in the real art world, but I also have a reason to come here.'

The Setouchi International Art Festival will be held every three years. It is on until Oct 31, after which the many permanent art sites on Naoshima and the other islands of the Seto Inland Sea will still be open to visitors. The islands can be accessed by car and passenger ferries from Uno or Takamatsu - a comprehensive network of ferry lines services the islands.