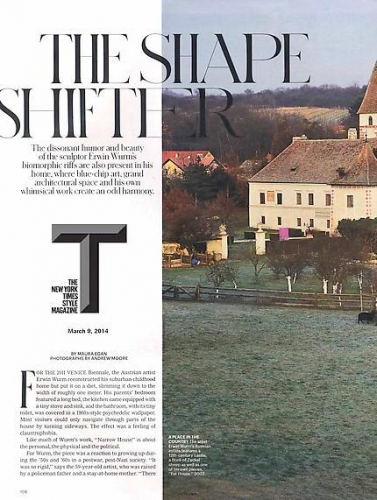 The Shape Shifter
By: Maura Egan


The dissonant humor and beauty of the sculptor Erwin Wurm’s biomorphic riffs are also present in his home, where blue-chip art, grand architectural space and his own whimsical work create an odd harmony.


For the 2011 Venice Biennale, the Austrian artist Erwin Wurm reconstructed his suburban childhood home but put it on a diet, slimming it down to the width of roughly one meter. His parents’ bedroom featured a long bed, the kitchen came equipped with a tiny stove and sink, and the bathroom, with its tiny toilet, was covered in a 1960s-style psychedelic wallpaper. Most visitors could only navigate through parts of the house by turning sideways. The effect was a feeling of claustrophobia.


Like much of Wurm’s work, “Narrow House” is about the personal, the physical and the political.


For Wurm, the piece was a reaction to growing up during the ’50s and ’60s in a postwar, post-Nazi society. “It was so rigid,” says the 59-year-old artist, who was raised by a policeman father and a stay-at-home mother. “There was only one program on the TV and you weren’t allowed to have long hair. I wanted to wear these orange socks so badly but my school wouldn’t allow me.”


These days, Wurm lives on a rather impressive spread in a small village 40 minutes northwest of Vienna. Schloss Limberg’s centerpiece is a 12th-century manse surrounded by a cluster of barns and stables that Wurm has transformed into studios and offices for his work and his team of about a half-dozen assistants. “I added that hill over there,” Wurm says. He points to a green mound that rises behind his “Fat House,” a marshmallow-like structure where his flock of sheep takes refuge during the colder months. “The town was upset with me adding it on the property so I said it was an art piece. It’s called ‘The Sleeping Venus.’ ” Wurm’s humor is a subtle blend of quirk and deadpan.


The estate, where he lives with his French graphic designer wife and their 3-year-old daughter (he has two older sons from his first marriage), had been occupied by various aristocratic families until the last count, who had no heirs, gifted it to the church. When Wurm bought it eight years ago, the building was in a fairly derelict state — the main rooms had been carved up into apartments and, as Wurm recalls, “there were lots of brown tile.” So he set about opening up rooms and stripping down layers, which in turn revealed an elegant, arched window; scenic mural paintings; even a lion sculpture. “This place was built like a fortress so there are all of these hidden stairwells and secret rooms,” Wurm explains as we walk through a labyrinth of halls to get to the main living room, which features one of his installations, a wall sheathed in pink wool, with two odd sleeves dangling from it.


Clothing and fabric have always been primary materials in Wurm’s work. When he applied to the Academy of Fine Arts in Vienna, he wanted to study painting but wasn’t accepted into the program and was sent to study sculpture instead. “It became an investigation into what sculpture can mean,” Wurm says. “And when I was starting out, I didn’t have a lot of money so I had to rely on everyday materials. Clothing was cheap and available.” (In the early ’90s, he famously created a series from another readily available material: dust.)


Wurm would layer himself in clothes to “add volume” and then strip off layers to create a different shape. “It’s like those weight-loss commercials with the ‘before’ and ‘after’ images,” he says. But rather than some kind of art-school stunt, Wurm was attempting to explore how society judges people by their body shapes. “We view fat people as lazy, poor white trash and slim people as active, organized and successful.” For another project, he donned a variety of sweaters, pulled them over to obscure his face and then contorted himself into absurd positions. (They would later become the basis for a series of headless, Dr. Seuss-like sculptures.) Clothing shapes our bodies, but it also shapes our notion of how we see ourselves. It serves as the border between us and the world, a protective armor. “As a sculptor, I’m interested in this idea of skin as a boundary,” says Wurm, who made a series of faceless figures in hoodies, like the British “soccer hooligans.”


According to Wurm, sculpture has always been a fluid concept, so for his “One Minute Sculptures” series, he posed or instructed other people to pose with everyday items: A woman sits precariously on top of a pole, another lies down with a suitcase on top of her, a man squeezes himself under a chair. The 60-second juxtapositions are funny one-liners come to life, but they’re also discomfiting and surreal. “Erwin is a sculptor of thought,” the gallerist Thaddaeus Ropac says. “It’s humor, instinct and irritation brought into the physical form.”


In 2003, Wurm’s “One Minute Sculptures” earned him international fame when the director Mark Romanek used the series as the basis for the Red Hot Chili Peppers’ “Can’t Stop” video. In it, the band members put buckets on their heads, stick markers in their nostrils and twirl trash cans in the air. “I agreed to let them use my idea with one condition — that at the end of the video, I was credited as being the source of the inspiration,” Wurm says. It’s a dynamic Pop Art video, an obstacle course of pratfalls and slapstick. “MTV was my biggest advertiser ever.”


Over the last decade, as he has grown more successful, the scale of Wurm’s work has become more ambitious. In 2000, he created his first “Fat Car”: an Alfa Romeo that he plumped up with Styrofoam and resin. The fattened, anthropomorphic automobile looks like something straight out of the Pixar studio. “It has a technological system and a biological one,” he says. Though the piece may put a smile on your face, Wurm doesn’t think it’s so humorous. He’s poking fun at society’s value system, our need for big, shiny toys. But not every work is charged with some serious or sinister message, or at least not one that Wurm is always ready to offer. In one of the barns, an assistant is working on a sculpture made of sausagelike elements, while just outside stands one of Wurm’s large gherkin sculptures. Why a sausage? Why a pickle? I ask. “There’s not always a why. . . . ” he lightly chastises me.


And perhaps the way he deals with his success in the art world — his work commands six-figure prices, he exhibits all over the world — is to not always look for a reason. At his home, mixed in with the Serge Mouille lamps and Prouvé chairs, there are works by Alex Katz, Joseph Beuys, Alighiero Boetti and Pablo Picasso. There are also older pieces like a Christ figure from the Renaissance period as well as a print of Albrecht Dürer’s “Melancholia,” depicting a woman with her head in her hands, plagued by her own thoughts. Wurm gazes wistfully at the image.


There is a bit of sadness, a frustration, in Wurm’s work — the artist trying to get across that there’s something not right with the world. But as he casts a glance around his own surroundings, he seems cautiously optimistic. “It’s nice to be able to have all of this. To be able to give it to my children. What am I going to do? Leave it for the church?”