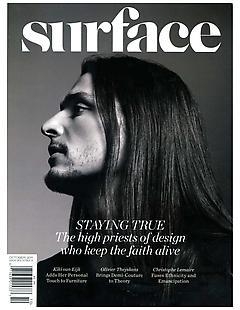 By Personal Invitation
By Marina Cashdan

In 1999, South Korean artist Do Ho Suh created his first fabric dwelling, "Seoul Home/L.A. Home," a baldachin of transparent silk shaped like a house, one that could be folded up and packed into a suitcase if desired. Through architecrural narrative, Suh defines and the n redefines the notion of home and intimate space, his work reflecting his life and personal history. "I am interested in the space that surrounds me and moves with me, both physically- my clothing, my house-and mentally, my memory," says Suh. "My desires to guard and carry around my own intimate space make me perceive it as infinitely movable, experienced through, and as, the movement of displacement."

Suh is intrigued by both the specificity and the movability of space, an interest developed as a result of uprooting himself from his native South Korea in 1991 to attend the Rhode Island School of Design. Since then he has frequently traveled around the globe. "Just when I become comfortable in a place," he says, "suddenly I'm off to a new one."

This September Suh has a show at Lehmann Maupin Gallery in New York with both old and new works. Among them: "Specimen Series" (2011), one- to-one scale fabric replicas of objects in Suh's New York apartment and its building corridors, each displayed like an insect specimen and hung together on the wall, salon-style. "Fallen Star 1/ 5" (2008-2011) is a one-fifth scale model of the house he lived in while at RISD with another one-fifth scale house crashing into it, the latter a traditional Korean hanok. The hanok represents the house that Suh grew up in, a recurring and self-referential motif in his work. In "Bridging Home" (2010), the hanok, situated between two warehouse buildings in Liverpool, is shown trying to negotiate a new setting. In "Home Within Home" (2008-2011), the hanok and Suh's Providence house are merged in icy blue resin.

Though his younger brother and sister-in-law are architects, Suh himself has no background in architecture and prefers being an artist. "I don't want to be restricted by building codes and regulations," he says. "I'm like an architect, but without any type of responsibilities."