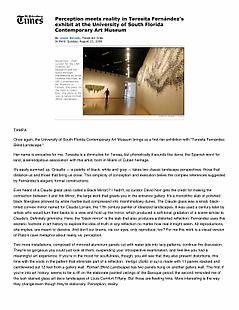 Her name is evocative for me. Teresita is a diminutive for Teresa, but phonetically it sounds like tierra, the Spanish word for land, a serendipitous association with this artist, born in Miami of Cuban heritage.

It's easily summed up. Grisaille — a palette of black, white and gray — takes two classic landscape perspectives: those that distance us and those that bring us close. This simplicity of conception and execution belies the complex references suggested by Fernández's elegant, formal constructions.

Ever heard of a Claude glass (also called a Black Mirror)? I hadn't, so curator David Norr gets the credit for making the connection between it and Ink Mirror, the large work that greets you in the entrance gallery. It's a monolithic slab of polished black fiberglass pillowed by white marble dust compressed into marshmallowy dunes. The Claude glass was a small, black-tinted convex mirror named for Claude Lorrain, the 17th century painter of idealized landscapes. It was used a century later by artists who would turn their backs to a view and hold up the mirror, which produced a soft tonal gradation of a scene similar to Claude's. Definitely gimmicky. Here, the "black mirror" is the slab that also produces a distorted reflection. Fernández uses this esoteric footnote in art history to explore the idea of truth in any reflection no matter how real it might seem. All reproductions, she implies, are meant to deceive. And don't our brains, via our eyes, only reproduce, too? For me this work is a visual version of Plato's cave metaphor about reality vs. perception.

Two more installations, composed of mirrored aluminum panels cut with water jets into lacy patterns, continue the discussion. They're so gorgeous you could just look at them, suspending your introspective examination, and feel like you had a meaningful art experience. If you're in the mood for soulfulness, though, you will see that they also present distortions, this time with the voids in the pattern that eliminate part of a reflection. Vertigo (Sotto in su) is made with 11 panels stacked and cantilevered out 12 feet from a gallery wall. Portrait (Blind Landscape) has two panels hung on another gallery wall. The first, if you're into art history, seems to be a riff on the elaborate painted ceilings of the Baroque period; the second reminded me of the lush stained glass art deco landscapes of Louis Comfort Tiffany. But those are fleeting links. More interesting is the way they change even though they're stationary. Perception, reality.

Epic unfolds grandly along almost 60 feet of wall space, 14,000 pieces of raw graphite (the stuff of pencil lead). It's Fernández's version of a vast drawing, beginning with a loose configuration of pebbles that picks up momentum, forming a dense concentration at its end. Each appears to cast a downward shadow that, on closer inspection, is a small smudge beneath each rock, another iteration of the Platonic reality and illusion debate and a literal reference to the philosopher's allegory of shadows on the cave wall.

A large related sculpture nearby is also made of graphite, an architectural curve of milled graphite tiles resembling a waterfall spilling into a tumble of graphite boulders, some buffed to a metallic shine. It's perhaps an homage to land artists such as Robert Smithson, whose sprawling land sculptures also mimic the landscapes in which they are placed.

The artist's most purely abstract installations are three wall sculptures with dozens of little stones made of polished onyx or silvered glass; one absorbs and the other reflects (though because the silvering is convex, we see ourselves upside down). Two are geometric, shaped as squares whose interior space seems to ripple as we move around it. The third is organic, resembling a tree's leafy canopy.

You might miss the final work, a tiny relief sculpture, beyond Epic. In a way, it's the most significant work, incorporating all elements of the other pieces. Made of graphite, it has the distillation of a Japanese land­scape. The material is mixed with a binding agent and used as a background wash and to shape trees and a sea. Pieces of graphite form rocky landmasses. The dark gray sky is dotted with stars made from thicker dots. It's a complete view, a microcosm of everything else in the galleries. Reflections, perceptions, mirroring reality: an illusion, of course, but a beautiful one.