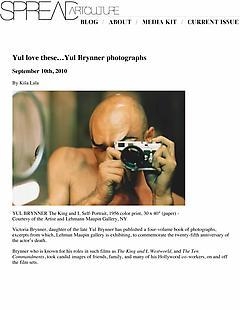 Victoria Brynner, daughter of the late Yul Brynner has published a four-volume book of photographs, excerpts from which, Lehman Maupin gallery is exhibiting, to commemorate the twenty-fifth anniversary of the actor’s death.
Brynner who is known for his roles in such films as The King and I, Westworld, and The Ten Commandments, took candid images of friends, family, and many of his Hollywood co-workers, on and off the film sets.

The images, taken from each of the four volumes, “Lifestyle”, “Life on Set”, “1956?, and “Man of Style,” depict such scenes as a running Frank Sinatra, just descended from a helicopter, Elizabeth Taylor relaxing poolside, Audrey Hepburn in a gondola, and portraits of a pregnant Mia Farrow – shot in nostalgic 1950s colours, or in more gritty black and white – they bring to light Brynner’s latent talent as a photographer with a skilled eye for capturing public performers in rare, unguarded moments.