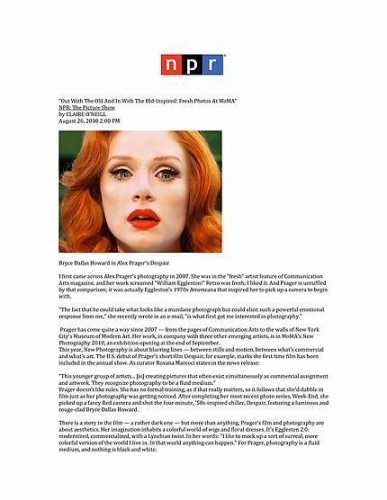 
I first came across Alex Prager's photography in 2007. She was in the "fresh" artist feature of Communication Arts magazine, and her work screamed "William Eggleston!" Retro was fresh; I liked it. And Prager is unruffled by that comparison; it was actually Eggleston's 1970s Americana that inspired her to pick up a camera to begin with.

"The fact that he could take what looks like a mundane photograph but could elicit such a powerful emotional response from me," she recently wrote in an e-mail, "is what first got me interested in photography."


Prager has come quite a way since 2007 — from the pages of Communication Arts to the walls of New York City's Museum of Modern Art. Her work, in company with three other emerging artists, is in MoMA's New Photography 2010, an exhibition opening at the end of September.

This year, New Photography is about blurring lines — between stills and motion, between what's commercial and what's art. The U.S. debut of Prager's short film Despair, for example, marks the first time film has been included in the annual show. As curator Roxana Marcoci states in the news release:


"This younger group of artists... [is] creating pictures that often exist simultaneously as commercial assignment and artwork. They recognize photography to be a fluid medium."

Prager doesn't like rules. She has no formal training, as if that really matters, so it follows that she'd dabble in film just as her photography was getting noticed. After completing her most recent photo series, Week-End, she picked up a fancy Red camera and shot the four-minute, '50s-inspired chiller, Despair, featuring a luminous and rouge-clad Bryce Dallas Howard.


There is a story to the film — a rather dark one — but more than anything, Prager's film and photography are about aesthetics. Her imagination inhabits a colorful world of wigs and floral dresses. It's Eggleston 2.0: modernized, commercialized, with a Lynchian twist. In her words: "I like to mock up a sort of surreal, more colorful version of the world I live in. In that world anything can happen." For Prager, photography is a fluid medium, and nothing is black and white.

www.npr.org
Back to Top