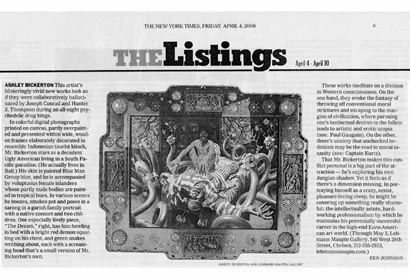 ASHLEY BICKERTON This artist's blisteringly vivid new works look as if they were collaboratively hallucinated by Joseph Conrad and Hunter S. Thompson during an all-night psychedelic drug binge.

In colorful digital photographs printed on canvas, partly overpainted and presented within wide, wooden frames elaborately decorated to resemble Indonesian tourist kitsch, Mr. Bickerton stars as a decadent Ugly American living in a South Pacific paradise. (He actually lives in Bali.) His skin is painted Blue Man Group blue, and he is accompanied by voluptuous female islanders whose partly nude bodies are painted in tropical hues. In various scenes he boozes, smokes pot and poses in a sarong in a garish family portrait with a native consort and two children. One especially lively piece, ''The Dream,'' right, has him howling in bed with a bright red demon squatting on his chest, and green snakes writhing about, each with a screaming head that's a small version of Mr. Bickerton's own.

That Mr. Bickerton makes this conflict personal is a big part of the attraction -- he's exploring his own Jungian shadow. Yet it feels as if there's a dimension missing. In portraying himself as a crazy, sexist, pleasure-loving creep, he might be covering up something really shameful: the intellectually astute, hard-working professionalism by which he maintains his perennially successful career in the high-end Euro-American art world.