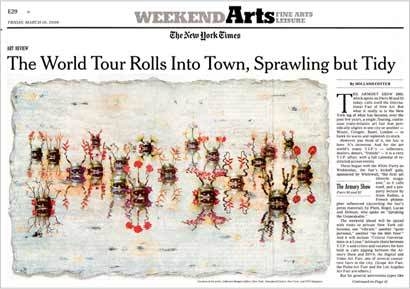 By HOLLAND COTTER
THE ARMORY SHOW 2006, which opens on Piers 90 and 92 today, calls itself the International Fair of New Art. But what it really is is the New York leg of what has become, over the past few years, a single, floating, continuous trans-Atlantic art fair that periodically alights in one city or another — Miami, Cologne, Basel, London — to hawk its wares and replenish its stock.

However you think of it, the fair is here. It's immense. And for the art world's many V.I.P.'s — collectors, dealers, donors, "friends" — it is a very V.I.P. affair, with a full calendar of restricted-access events.

These began with the White Party on Wednesday, the fair's kickoff gala, sponsored by Whitewall, "the first art lifestyle magazine," as it calls itself, and a pre-party lecture by Alain Badiou, a French philosopher influenced (according the fair's press material) by Plato, Hegel, Lacan and Deleuze, who spoke on "Speaking the Unspeakable."

The weekend ahead will be spiced with visits to private New York collections, one "vibrant," another "quite personal," another "on the 66th floor." And it will include "Critical Conversations in a Limo," intimate chats between V.I.P.'s and critics and curators for hire held in cars zipping between the Armory Show and DIVA, the Digital and Video Art Fair, one of several concurrent fairs in the city. (Scope Art Fair, the Pulse-Art Fair and the Los Angeles Art Fair are others.)

But for general admissions types like you and me, there is the Armory Show itself. Every new edition looks slightly different, partly in response to kvetching about the previous one. At one time, the show was badly overcrowded, with booths no bigger than walk-in closets. There was a revolt. The cry went up for more, more, more space. Now there is more, but at the cost of reducing the numbers of galleries. The count is 154 this year, and several notable names — Barbara Gladstone, Marian Goodman, Luhring Augustine, Daniel Reich — have dropped out.

Opened-up space also makes for some zany configurations near the front of the show, where at certain points you may not be sure of whose booth you're in. But beyond that point everything falls into regulation aisles-with-compartments order.

The mix can work great. I liked everything I saw in Galleri Charlotte Lund's selection of young Swedish artists, and especially a magical painting of two young women — the artist and her lover — by Ulrika Minami Warmling. The same was true at Kurimanzutto from Mexico City, with work by Carlos Amorales, Daniel Guzmán and Damián Ortega, a stimulating triumvirate.

Individual items of interest are in good supply: an eye-fooling sculpture by Heather Rowe at D'Amelio Terras is one; a sizzling-hot-looking painting that seems to be crying real tears by Aaron Curry at David Kordansky is another. If new work by the veteran Robert Mangold offers a model for a kind of cool neo-Minimalism we're seeing a lot of these days, paintings by Barry McGee (at Deitch Projects) and Jannis Varelas (at the Breeder) exemplify a trend of Pop-inflected, M.F.A. Outsider Art.

In general, dealers seem to have figured out that booths installed as mini-group shows tend to look a bit too much like what they really are: shops packed with product. Maybe that's why we're seeing so many solo exhibitions at this year's fair.

They aren't all scintillating. Neither Ena Swansea at Galeria Crone, Andreas Osarek, nor the Luc Tuymansesque Janis Avotins at IBID did much for me. But Robert Melee did, in an update of an earlier Chelsea solo at Andrew Kreps. Likewise, Terence Koh with his nightmare Port-o-San at Peres Projects. And Ashley Bickerton, who has turned Lehmann Maupin's booth into a demented South Seas salon.

Atul Dodiya has a far-less-eager-to-please installation at Nature Morte, of gallows framing passages from Tamil religious poetry, and Gary Simmons has a beautiful wall drawing outside the exhibition area at Pier 90. But the most moving — disturbing, funny, out-of-place-looking — sight for me was a Hannah Wilke retrospective at Ronald Feldman.

From her early, sassy feminist videos to self-portrait photographs, taken when she was dying of cancer, Ms. Wilke (1940-93) encompassed an amazing emotional, conceptual and political range: narcissism and mockery of narcissism; seduction and defiance; materialism and impermanence.

For me, she's the V.I.P. of this year's fair, and her presence raises many questions. Why don't we see more of the generation of female artists she represents? Why don't we see more contemporary female artists than the paltry number visible in galleries today? Why has art, the only remaining corner of Western "high" culture that can still offend established power, settled for doing so much less? Settled for being aisle upon aisle of smart, well-schooled knickknacks?

I don't know, but a thought came to me after I left the fair. The Armory Show two years ago, in 2004, was in every way of a piece with the 2004 Whitney Biennial: bright, light, expensive, fun. This year's Armory Show also coincides with a Biennial, but a darker, scrappier, more rebellious one, from which it feels utterly different. Is art changing in ways that art fairs cannot accommodate? For some of us, this is a very important question. And we hope the answer is yes.