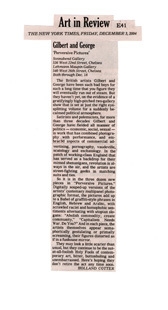 The British artists Gilbert and George have been such bad boys for such a long time that you figure they will eventually run out of steam. But they haven't yet, on the evidence of a gratifyingly high-pitched two-gallery show that is set at just the right eye-splitting volume for a suddenly becalmed political atmosphere.

Satirists and polemicists, for more than three decades Gilbert and George have fielded all manner of politics - economic, social, sexual - in work that has combined photography with performance, and embraced aspects of commercial advertising, pornography, vaudeville, scatology and eschatology. In the patch of working-class England that has served as a backdrop for their mimed shenanigans, revolution is always in the air, and the artists are street-fighting geeks in matching suits and ties.

So it is in the three dozen new pieces in "Perversive Pictures." Digitally souped-up versions of the artists' customary multipanel photographic format, the pictures add up to a Babel of graffiti-style phrases in English, Hebrew and Arabic, with scrawled racist and homophobic sentiments alternating with utopian slogans: "Abolish commodity; create community," "Capitalism Needs War. Do You?" And in each piece, the artists themselves appear semaphorically gestulating or primally screaming, their figures distorted as if in a funhouse mirror.

They may look a little scarier than usual, but they continue to be the not-at-all-foolish Holy Fools of contemporary art, bitter, buttonholing and unembarrassed. Here's hoping they don't retire the act any time soon.