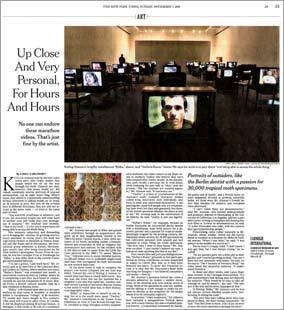 Up Close and Very Personal, for Hours and Hours
By LINDA YABLONSKY

Kutlug Ataman may be the only video artist alive who really wishes that people would not sit all the way through his work. Chances are slim, however, that many would try. His videos, essentially interior portraits of unusual personalities, can be eight hours long. What's more, they unfold in a potentially mind-numbing format restricted to talking heads, on as many as 40 screens at once. Not only do the screens face in different directions, they are also not always in the same room - or even in the same part of town.

"You watch for a half-hour or whatever, and if you are interested maybe you will come back at another time and make your own montage, out of snippets," Mr. Ataman said recently. "That is my work - it's for you to experience not being able to access the whole thing."

This intensely subjective and demanding art is bringing Mr. Ataman, 43, growing international attention. In recent years, his work has captivated viewers at biennials in Venice, Istanbul and São Paulo and at Documenta, the international group exhibition in Kassel, Germany. Last month, soon after being shortlisted for the Tate Gallery's prestigious Turner Prize in London, he won the Carnegie Prize in Pittsburgh for "Kuba," a new video work in the current Carnegie International biennial.

"I'm not a genius, I just work hard," Mr. Ataman said in an interview at the Lehmann Maupin Gallery in Chelsea, where another new piece, "Stefan's Room," was presented last month. A naturalized American born in Turkey, where he is completing a new film, he is based in London; recently he and his companion of 10 years, Martin Fryer, a British cultural attaché, took up a new residence in Buenos Aires.

"Kuba," a 40-channel opus shot in a dirt-poor enclave by that name in Istanbul, is installed within a cacophonous "village" of 40 monitors, TV stands and chairs bought at flea markets. (The work will travel to other cities. In London, it will be dispersed among 40 private homes; in Stuttgart, it will reside in 40 cars of a stationary railroad train.)

Mr. Ataman met people in Küba and gained their confidence through an acquaintance who grew up in that neighborhood. Settled in the 1960's by leftist Turkish Kurds, it later drew outsiders of all kinds, including violent criminals, thieves and prostitutes as well as religious fundamentalists and radicals. As one resident tells it, the district took its name from the Little Havana pictured in the 1980's TV series "Miami Vice." Unknown even to many Istanbul natives, its 300-odd people live in makeshift single-room mud huts with corrugated tin roofs surrounded by new modern high-rises.

In the three years it took to complete the project, two homes collapsed and one man was killed. Toward the end of filming, a woman revealed what had been a closely held secret: that the man she loved was not her husband but a neighbor's son who had raped her. Another resident invited a group of extremist Muslim women to her home to watch what was, to their dismay, a pornographic video.

"Kuba" is impossible to absorb in one sitting, but so is the much more spare "Twelve," Mr. Ataman's contribution to the Turner Prize exhibition, on view at Tate Britain through Dec. 23. Installed on large Plexiglas screens suspended in darkness, the video centers on six Shiite Arabs in southern Turkey who believe they were reincarnated after violent deaths. In the installation, each recalls a previous life in vivid detail, often confusing the past self, or "skin," with the present. "The two realities are mashed together," Mr. Ataman said. "It fascinates me."

"Twelve" is a kind of crystallization of Mr. Ataman's work: complex character studies culled from interviews with individuals who have in some way reinvented themselves. "I am pointing the camera at people who are refashioning their lives, but they also genuinely live them, so the viewer questions whether the piece is real or not," Mr. Ataman said. In the construction of an identity, he said, "reality is just one ingredient."

"Stefan's Room," for example, focuses on Stefan Naumann, an introverted Berlin dentist with a flamboyant male belly dancer for a domestic partner and a passion for tropical moths. Seemingly trapped by the probing camera, Mr. Naumann slowly unveils the 30,000 specimens he has cultivated, poisoned with cyanide gas and mounted in cases filling his small apartment. "The first time I went to their house," Mr. Ataman recalled, "I just couldn't believe my eyes. I had never seen anything like that in my life."

Part nature film and part psychological profile, "Stefan's Room" proceeds in five parts projected on facing translucent screens suspended at angles so rakish they look as if they have bounced into place. To enter this fractured cocoon is to step into Mr. Naumann's head while watching his thoughts - his beloved caterpillars and moths - float by.

Mr. Ataman's presence behind the camera intrudes whenever he makes a sudden movement, or his shooting arm tires and he starts to droop. Many of the questions he asks are audible, and his editing is crude enough to make his elisions as obvious as his sympathy for the people whose lives he intimately explores.

In previous "video sculptures," his subjects have included a nonagenerian Turkish opera star with a busy fantasy life and a troubled political history; a transsexual tormented by family, the police and ill health; and a British nurse almost helplessly devoted to growing amaryllis bulbs. All three were Mr. Ataman's friends before they became his subjects and remained close afterward.

"I can't claim these are documentaries," said Mr. Ataman, who earned undergraduate and graduate degrees in filmmaking at the University of California, Los Angeles, and has a parallel career writing screenplays and making feature films in Turkey. In documentaries, he said, "it is the filmmaker who talks, with his camera. But I get hypnotized by people."

Filmmaking came rather naturally to Mr. Ataman, whose mother rented out the family house in Istanbul as a location for about 50 Turkish movies. "When I was little," he said, "I was always in the middle of a movie set."

Yet he wasn't a happy child. "I didn't know I was gay then, but I was always crying," he recalled.

"So my parents gave me a little plot in their garden and I started growing orchids. You see, I have my own obsession with bulbs," he said, referring to "The 4 Seasons of Veronica Read," his video about the amaryllis collector. "I understood Veronica."

In these and other works, said Laura Hoptman, curator of the Carnegie International, "it's just extraordinary how Kutlug does not objectify his subjects. "They would be so easy to take advantage of, and he doesn't," she said. "The subject is the star and he never impinges on that."

In filming "Kuba," Mr. Ataman said, he was not always certain whether people were "performing or telling the truth."

"But once they start talking about what happened to them, you start feeling responsible," he said. "You feel close to them. And I want viewers to have the same experience through the piece."