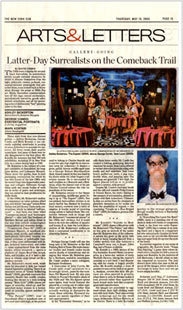 Latter-Day Surrealists on the Comeback Trail
BY DAVID COHEN

The 1980s were a heyday for secondhand Surrealism. As postmodern artists sought extreme measures by which to liberate themselves from the tight, politically correct, po-faced, conceptual-minimal avant-garde that preceded them, many looked back at Surrealism through the prism of 1960s Pop art. Brash, shameless commercialism was all the rage; sexual exuberance, melodramatic narrative, gaudy color, historic eclecticism, and all the posturing antics of deliberately "bad" painting came to the fore.

Three stars from that now-distant galaxy - Ashley Bickerton, George Condo, and Mark Kostabi - are currently enjoying comebacks. A passing of years, however, is no synonym for maturity: All three retain their puerile iconoclasm. And none of them ever really disappeared in the first place. Mr. Kostabi, for instance, has had 160 solo exhibitions, including 29 in New York City, in a career dating back to 1981.

Mr. Bickerton is the subject of a two-part exhibition at Sonnabend, his longtime dealer, and Lehmann Maupin. These unite the quirky, faux hi-tech packaging contraptions for which he was best known in the late 1980s with his recent forays into hyperrealist paintings and collages. Different though these early and recent bodies of work are in terms of genre and technique, they are united in their predilection for chilly shock.

In the 1980s, Mr. Bickerton's sardonic commentary on value systems allied him with fellow "neo-geo" artists Peter Halley and Jeff Koons. These early constructions, which he labeled "self-portraits" - they have also been titled "Commercial pieces" and "Anthropospheres" - also look like forebears of Matthew Barney and Adrea Zittel in the way they collide technological iconographies and obsessive design.

"Commercial Piece #2" (1989) at Lehmann Maupin, in anodized aluminum, wood, acrylic, and rubber, is a meticulously fabricated, wackily conceived container of indefinable function. A blue crate emblazoned with logos, technical instructions, and codes - some appropriated from the mass media, others invented - sports a plethora of James Bond-like straps, bolts, and handles, as if it held a precious or volatile cargo kitted out for a perilous journey.

Mr. Bickerton's recent work, made since he relocated to Bali, has turned toward figurative painting. There is an extensive series of "Green Reflecting Heads" (2006), ghoulish creatures that resemble Shrek's less cuddly cousins, floating like decoys in a toxic-looking swamp. "Hula Girls" (2006) places collages of raunchy, oiled-up, and besmirched Asian women in a honeycomb of cave-like spaces redolent of Magritte.

"The Patron" (1997) over at Sonnabend offers a jaundiced view of art's end users (although, as the picture used to belong to Charles Saatchi and is now for sale, that might be an inaccurate term for collectors.) It depicts a gross, pallid, hirsute middle-aged man on a George Nelson Marshmallow chair. Almost naked, he has one hand in his shorts while the other fingers a television remote. He is surrounded by such trophies as a Brancusi and a Mondrian, while the shaved coat of his pet Chinese Crested echoes the icky exposedness of the owner.

Mr. Bickerton returns to the theme of unappetizing, middle-age gents living it up in "The Expats" (2004). Two sun-pinked, beer-sodden retirees in an exotic harbor bar, flanked by luscious local escorts, converse over a table of empties. A louche mural of cavorting young sailors is behind them. The connection between such an image and Mr. Bickerton's "commercial pieces" of the 1980s isn't obvious, but it could have to do with the collision of squalor and luxury. If so, then the lurid photorealism of Mr. Bickerton's technique finds a conceptual justification in its alienating finesse.