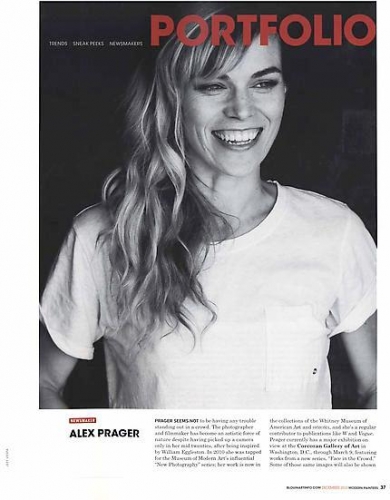 
Alex Prager seems not to be having any trouble standing out in a crowd. The photographer and filmmaker has become an artistic force of nature despite having picked up a camera only in her mid-20s, after being inspired by William Eggleston. In 2010 she was tapped for the Museum of Modern Art’s influential “New Photography” series; her work is now in the collections of the Whitney Museum of American Art and SFMOMA, and she’s a regular contributor to publications like W and Vogue. Prager currently has a major exhibition on view at the Corcoran Gallery of Art in Washington, D.C., through March 9, featuring works from a new series, “Face in the Crowd.” Some of those same images will be shown next month at Lehmann Maupin, the artist’s new gallery in New York. Julie Baumgardner caught up with Prager, known for her distinctively cinematic style, and discovered how deeply ingrained the silver screen is in her blood.

Why the switch to Lehmann Maupin?


I think they can help with getting my work out to a broader audience, as well as have it seen in a different context. The films have always been important to me, but it has become more important to be seen as a photographer. Lehmann Maupin represents artists who do film but who also make sculpture and painting. There is more room and freedom to experiment.


You’re a self-taught artist. How did you start making films, and how did those films translate to your vision as a photographer?


It came naturally—I didn’t even plan to get into film. I was exhibiting in London, my “Big Valley” series, in 2008 or so. That show was interesting because a lot of people came up to me at the opening and asked me what was happening in the photos in the moments before and after;  people were just automatically  turning the still moments into full scenes. They told me what their ideas were, what was happening to these women in the photos. A producer came up to me at the end of the opening and said, “Hey, if you ever want to make a short film, let me know.” At the time, I was starting to get bored with photography.  (That happens after almost  every show I do: I get bored for  a little while, and then suddenly  I’m like, “I need it!” and I go back into it.) But at that moment, I didn’t know if I wanted to continue taking still photos. So I threw myself into moving images. There are so many new challenges in the medium; coming out of that, I suddenly craved still photography again. And I was able to approach both in a different way.


For the Corcoran show, you created  an entire new body of work. Can you tell me a bit about it?


I had just finished showing my “Compulsion” series when Kaitlin Booher,  a curator at the Corcoran, asked me if I would be interested in doing a show with them.  She said that she’d love for me to make a couple of new pictures. And I already knew what my next series should be: I wanted to do “Face in the Crowd.” There are so many different ways to feel in a crowd. You can feel really alone and lost. There have been times when I just wander, staring at faces, especially in New York, where there are so many interesting characters. You look around at each person and wonder what their story is and where they are going. In L.A. we don’t have that city center full of crowds. I’ve always been interested in really unique faces and unique characters, like in Fellini or Woody Allen films. I wanted to bring light to all of that.


Are movies a huge influence on your work in general?


I wouldn’t say that they are a direct influence, even though people always mention Hitchcock. It’s interesting—I haven’t really seen that many Hitchcock films.


And are you interested in other photographers? When I think of crowds, I think of Andreas Gursky. But also, in regard to your work, Philip-Lorca DiCorcia comes to mind.


I definitely love those two, and other photography that uses staged ideas. But I have to say my main influence has always been street photographers—gritty, unexpected street photography that’s shot really artfully. When I need inspiration, I’ll just go through all my street-photography books and find interesting characters with strange outfits that make you think, Wow, I can’t believe that person actually put that on that day and thought it was a good idea.


Growing up, did you have creative ambitions?


I wanted to be an actress, a singer, a dancer. I was just one of those annoying kids. I lived in Los Feliz. I didn’t even go to high school. When I was 14 or so, I met this girl from Switzerland whose grandmother owned a knife shop. And I was just starting to get into a little bit of trouble; as a 13-year-old, I started dating a guy who was really bad news. Because we didn’t have money, my parents basically had two options: send me to public school in Los Angeles, which is kind of a scary thought, or send me to Switzerland to work in the knife shop. So I went to Switzerland. I stayed there for about five months with my friend, and then I traveled around Europe—that was my education—just traveling. To have had a formal education, to go through the whole system and then decide that you are going to risk everything, teach yourself to be an artist, fuck all the rules and go out and do it—that would have taken so much more courage than I have. Had I gone through the system a normal way, I don’t think I would have been brave enough to do it.