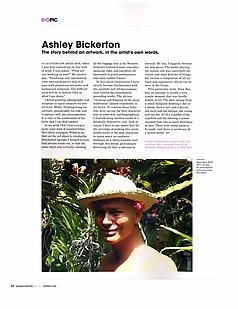 Ashley Bickerton: The story behind an artwork, in the artist’s own words.

IN AN INTERVIEW awhile back, when I was first embarking on this body of work, I was asked, "What are you working on now?" My answer was, "Pandering and ingratiating color-saturated pieces that will ooze with gratuitous sexuality and hackneyed exoticism. The difficult trick will be to believe fully in what I am doing."

I detest painting, photography, and sculpture in equal measure yet love all three. Madly. Painting being too cartoony, photography too cold, and sculpture, well, just presumptuous. It is only in the combination of the three that I can find comfort.

In my work I felt I was trying to make some kind of inverted Allan McCollum surrogate. Whereas he bled out the art object to irreducible dehydrated signage, I wanted to turn that process inside out, so that the same object was virtually vomiting all the baggage that is the Western artwork's historical mien: sexuality, meaning, color, and narrative, all harnessed in grand proclamatory and value· sodden frames.

In this latest incarnation I have clearly become disillusioned with the sunlight and wholesomeness that colored the immediately preceding works. The phrase "twisting and flapping in the neon wilderness" played ceaselessly in my brain. To confuse those folks who were saying the blue character was in some way autobiographical, I started using another model of a decidedly distinctive cast. Now of course I have to pay model fees for the privilege of making this point. Jimbo really is the blue character in many ways: an explosive madman on a white· knuckle tear through this world, gluttonously devouring all that is adrenal or sensual. He has, I suppose, become my new muse. The model playing the female role was conversely the tiniest and most delicate of beings, her tattoos a compilation of all my logos and signatures, which can be seen in the frame.

This particular work, Neon Bar, was an attempt to record a very simple moment that was hardly simple at all. The idea sprang from a small ballpoint drawing I did on a plane. Just a tart and a drunk, one local and one foreign, one young and one old, all of it a jumble of the repellent and the alluring, a power equation that cuts in many directions at once. There is no moral point to be made, and there is no dream of a better world.