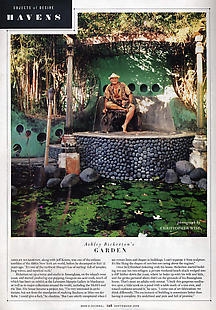 Ashley Bickerton, along with Jeff Koons, was one of the enfants terribles of the 1980s New York art world, before he decamped to Bali 15 years ago. "It's one of the mythical Shangri-Las of surfing: full of temples, long waves, and mystical reefs."

Bickerton set up a home and studio in Basangkasa, on the island's west coast, and started producing eye-popping, Gauguin-on-acid work, much of which has been on exhibit at the Lehmann Maupin Gallery in Manhattan as well as in major collections around the world, including the MoMA and the Tate. His house became a project, too. "I'm very interested in architecture, but not from the standpoint of studying Bauhaus or Mies van der Rohe. I could give a fuck," he chuckles. "But I am utterly enraptured when I see certain lines and shapes in buildings. I can't separate it from sculpture. It's like liking the shapes of cars but not caring about the engines."

Once he'd finished tinkering with his home, Bickerton started building not one but two refuges: a private weekend beach shack wedged into a cliff farther down the coast, where he holes up with his wife and kids, and the grotto pictured above that's on the grounds of his Basangkasa home. That's more an adults-only retreat. "I built this gorgeous meditative spot, a little nook on a pond with a table made of a tree root, and tossed cushions around it," he says. "I come out of art fabrication; we think differently. The excitement of building is sometimes better than having it complete. It's undefined and pure and full of promise."