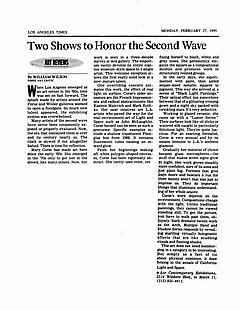 Two Shows to Honor the Second Wave
By William Wilson

When Los Angeles emerged as an art center in the ‘60s, time was set on fast forward. The splash made by artists around the Ferus and Wilder galleries seemed to open a floodgate. So much new talent appeared, the exhibiting system was overwhelmed.

Many artists of the second wave have never been consistently exposed or properly evaluated. Now, the era that contained them is over and its century nearly so. The clock is slowed if not altogether halted. There is time for reflection.

Mary Corse has made art here - Since the early '60s. She emerged in the '70s only to get lost in the crowd, like many others. Now, her work is seen in a three-decade survey at Ace gallery. The emporium rarely devotes its entire copious museum-style space to a single artist This welcome exception allows the first really solid look at a now-mature talent.

One overriding concern animates this work, the effect of real light on surface. Corse's older ancestors are the French Impressionists and radical abstractionists like Kasimir Malevich and Mark Rothko. Her near relatives are L.A. artists who paved the way for the real- environment art of Light and Space such as John McLaughlin. Corse herself can be seen as such a precursor. Specific examples include a shallow translucent Plexiglas box from 1966. It contains fluorescent tubes causing an inward glow.

From her beginnings making off-white polygon- shaped canvases, Corse has been rigorously abstract. She rarely uses color, confining herself to black, white and gray tones. She persistently employs the square as a compositional module and produces work in structurally related groups.

In the early days, she experimented with paint then added sequin-sized metallic squares to pigment. This way she arrived at a series of "Black Light Paintings." Their optical effect lies somewhere between that of a glittering evening gown and a night sky packed with twinkling stars. It's very seductive.

Working in glazed ceramic, she came up with a "Luster Series." Their surfaces look like oil slicks or watered silk caught in particularly felicitous light. They're quite luscious. For an exacting formalist, Corse is very sensual and by no means immune to L.A.'s ambient glamour.

Gradually her material of choice became glass microspheres—the stuff that makes street signs glow at night. Her work grows steadily more confident, sure of its aims and just plain big. Formats that give barn doors and boxcars a run for their money aren't that size just to impress us. They do important things that illuminate understanding of her whole oeuvre.

Corse's work depends on the environment. Compositions change with the light. Unlike traditional paintings, they cannot be viewed standing still. To get the picture, you have to walk past them, obliquely. Such dramatic recent work as the Arch, Multiple Band and Shadow Series responds by revealing startling virtually hologramic effects that are like scudding clouds and fleeting shades.

This art does not need membership in a category to be interesting. But simply as a fact of its sheer physical existence, it does belong in the annals of California Light and Space.