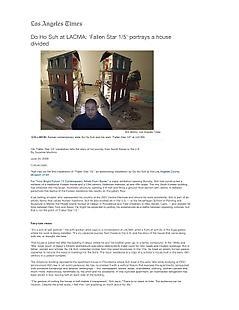 That may be the first impression of "Fallen Star 1/5," an astonishing installation by Do Ho Suh at the Los Angeles County Museum of Art.

For "Your Bright Future: 12 Contemporary Artists From Korea," a major exhibition opening Sunday, Suh has constructed a collision of a traditional Korean house and a 19th century American mansion, at one-fifth scale. The tiny South Korean building has smashed into the larger, multistory structure, splitting it in half and filling a ground-floor section with debris. A deflated parachute-like replica of the Korean residence lies nearby on the gallery floor.

A jet-setting sculptor who represented his country at the 2001 Venice Biennale and shows his work worldwide, Suh is part of an artistic family that values Korean traditions. But he also studied art in the U.S. -- at the Skowhegan School of Painting and Sculpture in Maine, the Rhode Island School of Design in Providence and Yale University in New Haven, Conn. -- and divides his time between New York and Seoul. He might be expected to portray his experiences as a battle between opposing cultures, but that's not the point of "Fallen Star 1/5."

Fairy-tale vision
"It's a sort of self-portrait," the soft-spoken artist says in a conversation at LACMA, amid a flurry of activity in the huge gallery where his work is being installed. "It's my personal journey from Korea to the U.S. and the story of the house that came along with me, or brought me here."

That house is patterned after the building in Seoul where he and his brother grew up, in a family compound. In the 1950s and '60s, when much of Seoul's historic architecture was being destroyed to make room for new roads and modern buildings, Suh's father, painter and scholar Se-Ok Suh, collected lumber from the razed structures. In the '70s, he hired an elderly former palace carpenter to recycle the wood in buildings for the Suhs. The boys' residence is a copy of a scholar's house built in the early 19th century in a palace complex.

The American building represents the apartment house in Providence where Suh lived in the early '90s while studying at RISD (pronounced RIZ-dee in art world parlance). He has re-created it with a vertical fissure that exposes the apartments, jampacked with miniature furnishings and tenants' belongings -- tiny newspapers, books, sofas, chandeliers, clothing, kitchen utensils and much more, meticulously handmade by the artist and his assistants. In one ruptured apartment, an overloaded refrigerator has been sliced in two, leaving half on each side of the building.

"The gesture of cutting the house in half makes it transparent," Suh says. "There is no place to hide. The audience can be voyeurs. Despite the small scale, I feel that I am exposing so much about my life."

"Fallen Star 1/5" also comes with a story and as part of an ongoing project.

"It's a simple story, like a fairy tale," Suh says, launching into the tale.

"I was in the house, making my first fabric architectural piece," he says, referring to a full-size replica of his childhood home made of light green transparent cloth. "All of a sudden, there was a tornado that took the building into the sky. I didn't know where I was going, but then I saw the ocean and a bridge from Seoul to New York, so I knew that the house was heading to the U.S.

"I realized the house was going down soon, so I finished my fabric piece to use it as a parachute. I got scared when I realized that the house was slowing down and I couldn't see land," he says. "I decided to throw things away, but there were so many things I was personally attached to. I made a list of things I possessed and prioritized them. It gave me time to reflect on my entire life in that house. Then I crossed off things on the list. In the end, I decided to throw out pretty much everything except what was essential to survival.

"When the building started to descend, I went up on the roof with the parachute. The house started to come down and crash, but it had a semi-soft landing. And that's how I feel. Culture shock didn't come as a shock to me. It took a long time."

Homecoming
Suh has been working on "Fallen Star 1/5" for 2 1/2 years, after completing earlier parts of the project, such as "Fallen Star: Wind of Destiny," a Styrofoam and resin tornado-like form that's about 9 feet tall. Eventually, there will be seven chapters.

"My plan is to make a sculptural installation that represents each chapter," he says. "When I have all that, people can move from one piece to another and put them together as a complete story."

Suh -- who will have a public conversation with LACMA curator Lynn Zelevansky Thursday at the museum -- studied traditional Korean painting at Seoul National University before beginning his American education. He planned to be a painter, but a sculpture class at RISD changed his direction.

"Every assignment just resonated with me," he says. "I am so glad that I didn't have a traditional sculpture education in Korea. I have been very free to do whatever I want with different materials."

The LACMA exhibition is a sort of homecoming for the artist, who launched his architectural fabric sculpture in 1999 in an exhibition at the Korean Cultural Center. "Fallen Star 1/5" recalls that work, but also moves far beyond it. So does "Home Within a Home," a smaller installation of four computer-designed, translucent honeycomb-resin sculptures that merge the "Fallen Star" houses into relatively clean forms.

"The idea here was to fix those two houses to make a livable space," Suh says. "If you start to move things around, maybe the Korean house loses its identity, sort of blends in with the American style -- or the other way around. I would love to build a house like this because it raises very interesting questions. Are you in a Korean house or an American house? That's a constant question to myself."

"The common misunderstanding," he says, "is that my work is a confrontation, a clash of cultures. It's not really about that. It's more about interdependency and the way things coexist. That's what I'm interested in, how to survive, how to blend in. It's an ongoing process."