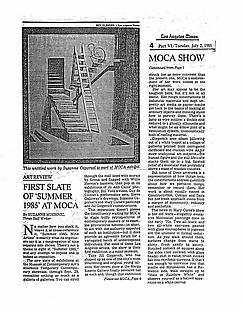 First Slate of ‘Summer 1985’ at MOCA
By Suzanne Muchnic

No matter how you stack it, weave it or cross-reference it, “Summer 1985: Nine Artists” is exactly what its organizers say it is, a congregation of nine separate solo shows. There’s not a theme in sight at “Summer 1985” and any attempt to impose one is indeed an imposition.

The new slate of exhibitions at the Museum of Contemporary Art’s enormous Temporary Contemporary showcase, through Sept. 29, resembles nothing so much as a galleria of galleries. You can stroll through the mall lined with murals by Gronk and flagged with Willie Herron’s banners, then pop in on exhibitions of Jo Ann Callis’ photography, Bill Viola’s video, Guy de Cointet’s performance sets, Steve Galloway’s drawings, Suzanne Caporeal’s and Mary Corse’s paintings and Jill Giegerich’s constructions.

This separatism doesn’t please the constituency waiting for MOCA to stage boffo retrospectives of contemporary masters or to examine provocative notions—in short, to act with the authority expected of such an institution—but it does provide an agreeable forum for a variegated batch of underexposed individuals. For most of these Los Angeles artists, the show is their first exhibition in a major museum.

Take Jill Giegerich, who has shaped up as one of the city’s most interesting and original young talents. Her recent show at the Margo Leavin Gallery finally revealed her as such and, though that exhibition struck me as more coherent, than the present one, MOCA’s endorsement of her work comes at the right moment.

Her art may appear to be the toughest here, but it’s not at all exotic. Her rough constructions of industrial materials and such unpretty art media as papier-mache get back to the basics of looking at ordinary objects and thinking about how to portray them. There’s a lamp as wire outline, a double sink reduced to a ghostly silhouette and what might be an elbow joint of a ventilation system, illusionistically built of roofing material.

Giegerich sees steam billowing out of a white teapot as a collage of patterns printed from corrugated cardboard and chicken wire. As for more traditional art subjects—the human figure and the still life—she stacks them up in a big, faceted relief of a muscular man protruding above a mass of wooden volumes.

But none of these artworks is a representation of how things look; the constructions address questions about how we perceive things, remember or record them. Her work is about equally rooted in Constructivism, Cubism and Dada but her fresh approach stems from a merger of domesticity, industry and aesthetics.

The news in Mary Corse’s show is her old work—elegantly evocative Minimalist paintings done in the early ‘70s. Two all-black and two all-white canvases painted with glass microspheres in pigment are the ultimate in formal seduction. As you walk around them, surfaces change from matte to shiny, from sandy to satiny. Notched corners or squares along the sides (not covered with glass beads) shift in value; brush strokes fall into rhythmic currents. If that’s no enough to convince you that sterile old Minimalism has a Romantic side, walk straight up to “Halo in Rainbow White” and observe yourself as a haloed apparition on a white canvas.