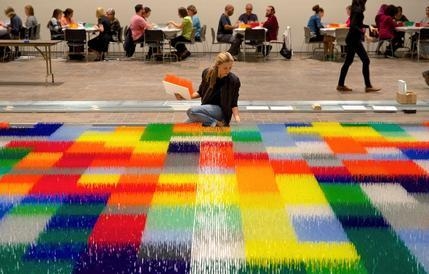 For those who wear glasses, the artist Liza Lou suggests taking them off when viewing her newest work, “Color Field.” The site-specific installation, a monumental, iridescent grid of colors, is part of the exhibition “Liza Lou: Color Field and Solid Grey” at the Neuberger Museum of Art. “Color Field” blankets most of the floor of the Theater Gallery, requiring museumgoers to walk around its periphery. As they do, the piece seems to shimmer and transform: now airy, now dense; patterns emerging and disappearing; tonal relationships continually shifting.

What creates these qualities (which are, perhaps, especially appreciated with less-than-crisp vision) are tiny cylindrical glass beads in 30 hues, among them vibrant blues, yellows, reds and greens. Grouped by color, the beads are stacked on 4-inch-tall stainless steel wires to form what Ms. Lou called “blades of grass.” Again grouped by color, the blades are inserted into holes drilled into white Signex plastic tiles, each a little less than a foot square. There are 1,196 tiles, with 576 blades per tile and 11 beads per blade, which comes to approximately 1,100 square feet of nearly 700,000 blades and more than seven million beads.

Although “Color Field” is Ms. Lou’s largest work to date, such quantities are not new to the artist, who was named a John D. and Catherine T. MacArthur Foundation fellow in 2002. Glass beads have been her trademark since the 1990s, when she spent five years applying them to the surface of a true-to-scale, fully stocked kitchen. Since then, Ms. Lou has beaded structures including a full-scale model of a flower-filled suburban backyard, a 1949 Spartan Mobile Mansion trailer, a chain-link enclosure topped with barbed wire, a life-size reproduction of a cinder block prison cell and two versions of a mile-long coiled rope.

To make her kitchen piece, Ms. Lou worked alone. After that, she enlisted help from community members, first near her studio in Los Angeles, and then in KwaZulu-Natal province in South Africa, where beadwork is a longstanding tradition and where Ms. Lou, now 46, lived from 2005 to 2014 and continues to maintain a studio. All of the pieces on view at the Neuberger were beaded by a team of 30 Zulu women; “Color Field” was assembled in Westchester County by more than 500 local volunteers, directed by Ms. Lou at the museum.

“For me, the best part is the making,” she said on a recent morning, standing beside her installation. “Being able to share that, extend that, open the doors and have other people join me in it, is one of the greatest privileges I can imagine.”

Throughout her career, Ms. Lou’s sparkling beaded exteriors have elicited astonishment and delight. But her content has been more ominous, mining themes of drudgery, confinement and political unrest. The works in “Color Field and Solid Grey” denote a shift away from representation, a paring down of content to its essentials. “I became really interested in seeing what would happen if I took away subject matter and just had it be about process,” she said.

Of “Color Field,” she said, “What I’m trying to do here is make a project about labor and color.” An initial version of “Color Field” was shown at the Museum of Contemporary Art San Diego in 2013. The piece was reconfigured for the Theater Gallery and is now almost three times as large.

Labor and color are also the focus of selections from two bodies of work, “Solid Grey” and “Color/White,” hung on the walls of the adjacent South Gallery. This space holds 19 roughly square monochromatic sheets woven entirely with glass beads and mounted onto stretcher frames. Ms. Lou called them “canvases.” From a distance, they resemble paintings in single colors ranging from shades of gray to gold, lavender and pink. Moving closer, details become visible: the seemingly endless arrays of little beads, some matte, others that glisten when they catch the light, and faint horizontal lines, evidence of the individual strips woven by different women and then sewn together to produce the whole.

For these pieces, the women beaded at home. “They have children and families and lives,” Ms. Lou said, “and it’s expensive and dangerous, really, for them to be traveling back and forth to my studio.”

As a consequence, the canvases reveal subtle striations, random variations in color, though each was constructed from indistinguishable machine-made beads. “I would hand out one color to my team and they would make their strips,” Ms. Lou said, “and each strip would come back completely unique and different, even though the beads were identical.”

The differences, she explained, were caused by activities taking place while the women were handling the beads. “The wood smoke from their cooking, their sweat, the oil from their fingers,” Ms. Lou said. “It’s because of the nature of the human hand. It’s why I’m really excited about these bodies of work. Each piece tells the story of what was going on in their lives.”

Ms. Lou’s oeuvre straddles genres, with elements of sculpture, painting and crafts. She said she thought of “Color Field” as a massive crosshatched drawing. “When you look at each individual line as a mark,” she said, “it’s a way of putting down color.”

Helaine Posner, the museum’s senior curator of contemporary art and the curator of “Color Field and Solid Grey,” noted references in the exhibition to modernism and geometric abstraction. The very title of “Color Field,” she said, evokes the work of color field painters like Mark Rothko and Helen Frankenthaler, while the canvases allude to monochromatic minimalist paintings by artists such as Agnes Martin and Anne Truitt. Ms. Lou cited Georges Seurat as an influence.

Yet a more insistent inspiration is her team of Zulu beaders, whom she described as “juicy wild women who are insanely wonderful.”

They are also dependent on Ms. Lou for their income. “That’s why I’m still there,” she said. She recalled their expressions of gratitude as she brought beads into her studio for the “Color Field” blades. “They started singing gospel songs and praising God,” she said.

Recognizing the women’s reliance on and appreciation for the work she was providing drove Ms. Lou to reconsider the meaning of survival. In Africa, she said, “if you know how to weave something, you can make a living.”

But what about in a first-world society? “What would you do if you had nothing?” she asked. “What could you make? What could you sell? Could you sing a song? Could you tell a story? Those are fundamental questions about what it is to be alive.”

These questions, along with Ms. Lou’s commitment to the women, have infiltrated her creative process. “It wasn’t just, ‘I think I want to make this project bigger,’” she said. “It was about them.”