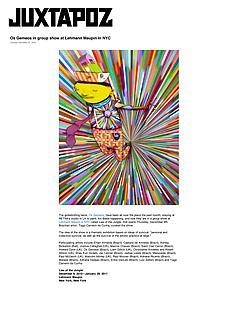 Os Gemos in Group Show at Lehmann Maupin in NYC

The globetrotting twins, Os Gemeos, have been all over the place the past month, staying at RETNA's studio in LA to paint, Art Basel happening, and now they are in a group show atLehmann Maupin in NYC called Law of the Jungle, that opens Thursday, December 9th. Brazilian artist, Tiago Carneiro da Cunha, curated the show.

The idea of the show is a thematic exhibition based on ideas of survival: "personal and collective survival, as well as the survival of the artistic practice at large."