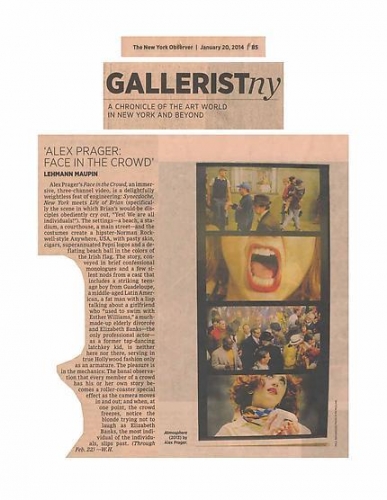 ‘Alex Prager: Face in the Crowd’ at Lehmann Maupin
By: Will Heinrich


Alex Prager’s Face in the Crowd, an immersive, three-channel video, is a delightfully weightless feat of engineering: Synecdoche, New York meets Life of Brian (specifically the scene in which Brian’s would-be disciples obediently cry out, “Yes! We are all individuals!”). The settings—a beach, a stadium, a courthouse, a main street—and the costumes create a hipster–Norman Rockwell-style Anywhere, USA, with pasty skin, cigars, superannuated Pepsi logos and a deflating beach ball in the colors of the Irish flag. The story, conveyed in brief confessional monologues and a few silent nods from a cast that includes a striking teenage boy from Guadeloupe, a middle-aged Latin American, a fat man with a lisp talking about a girlfriend who “used to swim with Esther Williams,” a much-made-up elderly divorcée and Elizabeth Banks—the only professional actor—as a former tap-dancing latchkey kid, is neither here nor there, serving in true Hollywood fashion only as an armature. The pleasure is in the mechanics: The banal observation that every member of a crowd has his or her own story becomes a roller-coaster special effect as the camera moves in and out; and when, at one point, the crowd freezes, notice the blonde trying not to laugh as Elizabeth Banks, the most individual of the individuals, slips past.