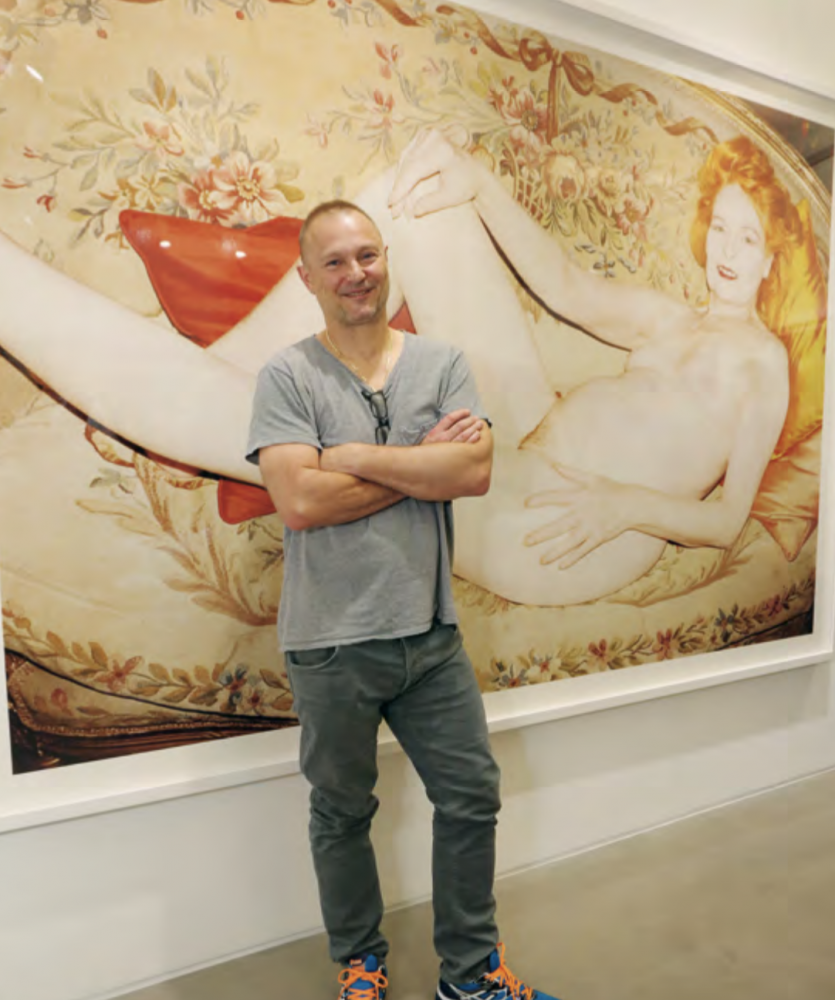 One of a trio of fashion photographers who made up the irreverent ‘holy trinity’ – the other two being Wolfgang Tillmans and Terry Richardson – of magazine photography in the 1990’s, Juergen Teller has long been known for his overexposed photography that pulsates with a raw energy, which in turns gives way to an exotic aesthetic unmatched by few of his contemporaries. While the 90’s gave us a naked Charlotte Rampling shot against the palatial backdrop of The Louvre, the last 15 years has seen the photographer expand further into art, with the publishing of the Marchenstuberl series in 2003 finally cementing that claim.

Strange is le mot du jour when we meet at Lehmann Maupin Hong Kong, where the artist’s latest ‘food porn’ series and a single nude shot of fashion maven Dame Vivienne Westwood is shown alongside Chinese artist Xiang Jing’s nude sculptures, on a drizzly Thursday afternoon. Having just arrived in Hong Kong the night before, the artist has a packed two-day schedule – a press preview, an opening party, followed swiftly by a celebratory dinner, not to mention all the interviews littered in between. It’s no wonder that he requested to go for a swim prior to opening night. “I’m suffering from a terrible jet lag, so everything seems a bit strange to me right now,” the 51-year old, who lives in London with his wife, art dealer Sadie Coles and their son, Ed, says, slapping his forehead lightly.

Disbelief, however, soon morphed into a beautiful friendship and it was in the ultraluxurious set-up of the hotel, while satiating himself with calorie-laden Italian cuisine, that Teller snapped away at chef Antonio Guida’s sumptuous plates.

“Imagine the amount of effort it took arranging everything on the plate so perfectly! It’s almost strange,” Teller muses.

While Food No.102, Hotel Il Pellicano 2010 reminds one of a Japanese garden, where every shrub and bud is arranged to a T, Food No.116, Hotel Il Pellicano 2010 conjures the image of a pink worm that appears to be feasting on a lump of dung. When juxtaposed with Xiang’s nudes, themselves full of sexual innuendos and yet stripped of all mortal desires, Teller’s overexposed food shots draw viewers in with their earnestness – one that is so keen that it almost borders on the perverted. And indeed, as Teller says when asked whether he’s trying to evoke the opposite of desire with the series, “curiosity is what I want to evoke above all else. It’s not like I expect someone to come into the gallery, stare at my pictures for five minutes and then immediately think, oh I must go eat now!”

Yet the photographer denies being obsessed with food. “I’m obviously curious about it, or else I wouldn’t be photographing it, but it’s not like I’m obsessed with it or anything,” he gives another one of his characteristic nonchalant shrugs.

A SIMPLE MAN
He’s shot high-profile campaigns for Louis Vuitton, Celine, Marc Jacobs and Vivienne Westwood, and while Teller has no qualms about hanging out with the high fashion
set, he doesn’t particularly aspire to the booze and drug fuelled glamorous lifestyle either. The artist still uses a flip phone, which he plays with endearingly from time to time during our chat.

“Obviously, working with brands has opened up doors previously inaccessible to me. I mean, it’s ridiculous to think I can just call up Cindy Sherman and say ‘why don’t we do a couple of portraits?’” he says, referring to that famous shot of the American artist (and himself) being cast as social misfits as part of Marc Jacobs’ 2005 fashion campaign. “I like to indulge in this fantasy world that all these great fashion designers have crafted, but I’m also quite simple, if you know what I mean?” he says, eyebrows knitted together.

Raised in the simplistic environs of the musical town of Bubenreuth in Germany, Teller hadn’t always wanted to be a photographer. He worked for a time in his family’s violin making business but upon developing an allergy to the wood, decided to take a break in Tuscany.

Picking up a camera seriously for the first time in his life, he saw, via the pintsized viewfinder, a completely different world on the other end. In 1984, he took a photography course at the now defunct Bayerische Staatslehranstalt fur Photographie and debunked for London two years later.

Fast forward 29 years and certain practices in the fashion world still baffle him, including having to take his sneakers off aboard ‘one of those’ fancy-schmancy yachts. “Seriously it’s so strange! If this plastic boat is so expensive and what people call luxury, you should be able to scratch it in whatever way you want!” he intones, shaking his head. “It’s not luxury when you end up being trapped by all these objects. For me, luxury is the freedom to do whatever I want,” the artist insists.

“I think this is why fashion photography works for me, because at the end of the day, I can just laugh about it all.” And perhaps that is where Teller’s secret to success lies – despite being on a perpetual hunt for the beautiful, the bizarre and – if you will – ‘strange’ as a photographer, he can always take a step back and say with irreverence: “Oh nobody needs any of it, really!”

One question remains though: what does one make of the Vivienne Westwood nude that is exalted by arty types but seems strangely slotted among the collection of food images?  “I think she fits right in. There is this exoticness and lavishness to her in this image,” he says slowly after careful deliberation. “I also want to leave her there as a question mark. Perhaps she can become a third component of the show, next to all the bizarre food landscapes and nude sculptures,” he concludes with a satisfactory smile.

Whether we should approach it as we would art or fashion photography, a nude or food shot – well, one can only guess.