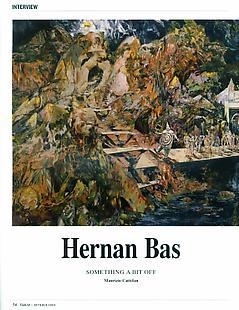 Something A Bit Off
By Maurizio Cattelan

MAURIZIO CATTELAN: So, you're in Detroit at the moment?

Hernan Bas: Yup, the house I bought up here is almost done. It's been under renovation for almost a year and things are finally wrapping up. My future studio in the basement is three days from being finished and I'm feeling really anxious to start working again.

MC: I understand you've taken a little time off; is this why you feel nervous to start up again, to start from scratch, expecially in a new city and a new studio as well?

HB: I haven't painted in nearly a month, and it's been a little odd. I had two solo shows this past spring/summer and they pretty much drained me, and after coming back from Venice I really needed a break. By the way, I threw out the much-discussed salami that you contributed to the catalogue/bag for Elmgreen & Dragset's Danish and Nordic pavilions ''The Collectors." I packed at 7 am and didn't want to deal with customs asking why a salami was so important. If that thing really becomes a collectable, I'm calling you for a replacement!

MC: It was just meant as a snack.

HB: I know! I actually really liked what you put in the pavilion itself though, the taxidermy dog [Untitled (2009).] I made a painting a while back called The Prude Listening to Love Songs (2006) that mimicked the same classic RCA Victrola phonograph advertisement. I'm guessing that is what you had in mind?

MC: Sure, sure .. so do you have any plans for your next work? Are you reading/sketching? Being lazy and just thinking'? Tell me about how you work, how your paintings come about.

HB: Well, I'm a bit foggy right now, I'm starting my usual 'research' phase, meaning I read A LOT, I watch A LOT of movies I've been holding off on, and I get obsessively interested in new stories or tales I come across, fictional or true, it doesn't matter, as well as particular artists who I might have ignored or been indifferent to before.

MC: Who do youI mean?

HB: Well, I am looking at James Ensor right now, super freak of the 19th century, but at the same time I am in love with Van Gogh. His drawings in particular are my favorites - he has such a skilful hand. I'm very jealous of it. At the same time, he's such an artist myth, probably the greatest of them all. His story is so utterly romanticized and so completely bullshit, he must have known damn well he could paint. He was buddies with Gauguin, he was not just some outsider artist with a mental illness and, supposedly, one ear.

MC: It may be good to be an artist with one ear today!

HB: This is true. Deaf may be better though. But, besides Ensor and him, I'm also really drawn to some Canadian painters right now. Blame it on my current proximity to the North, but I've been into David Milne and Tom Thomson. Landscape painters mostly, but with a bit of something "off" about them. A lot like Charles Burchfield. He's not Canadian, I know (from upstate New York, I think), but close enough ..

MC: So, to return to your research and thinking process in the work, I wanted to ask you about the recurring interest you have in the supernatural. It's probably what you mean when you say there is something "off" about those painters…there's a lot of references to the occult, ghosts and such. Is there any personal reason for this, or is this just back to you seeking out interesting stories?

HB: It's both really. I had a spooky childhood in northern Florida. It was all U.F.O. and Bigfoot sightings mixed with ghosts in the woods and a bunch of other bizarre occurrences. My older sister and brother were goths-in-training as well, so that helped. But besides that I do love stories like you find in the series of books "Mysteries of the Unknown." In grammar school I was always in the library checking out the same books in what could surprisingly be called the occult section! There were two encyclopedia sets specifically that I would pour over any chance I got. The one I remember most was published by Time-Life Books and was advertised on television as the equivalent to the Encyclopedia Britannica, except that it was meant for an audience that believed in crystal healing and werewolves! I think I knew it then, but to me it still seems so much more interesting at times to read about the day it rained toads or sardines from the sky in a small town in Britain than it would be to read about, let's say, Postmodernist theory or Relational Aesthetics ... It adds a lot to my work I believe, these little stories behind them all. They make it more alive. Sometimes I like legends more than I like artworks. Have you ever had any spooky experiences?

MC: I definitely have! I once worked in a mortuary. My uncle Franco warned me not to take the job, but he was always overly superstitious and it was an easy job. So, I went ahead with it. He turned out to be right! It was always so cold and there is something very uneasy about being in a room fulI of stiffs and feeling that anyone of them could just start moving any minute.

HB: Does that have anything to do with the taxidermy work?

MC: Let's save that for another discussion ... So your work is often discussed in relation to literature but I don't see any direct references to classic occult texts or writers you might expect like Edgar AIIan Poe. Do you intentionally stay clear of, I guess you could say, the more obvious choices?

HB: I love Poe, but besides it being such a recognizable body of work, I also try to avoid having the work come across as purely illustrative. I am drawn to stories and tales but I hope my interest in them translates further, as images that go beyond pure representation of things that I find cool. I love the written word but I am at a constant battle trying to make images that can stand alone and compete or, better, surpass the written word. I like when the work becomes an image. That moment when everything I read and thought about to get to this finished painting just drops away, and it gets its own life, its own space for interpretation. Once I've let it leave the studio I don't feel like it's mine whatsoever anymore.

MC: So you are comfortable with letting the work go in the end, sending it off to new parents after a period of nurturing the idea? My work is more of a test-tube baby, so I am curious about the ability of a painter like yourself to part with a more personal hands-on product.

HB: I'm not too attached to the actual work. If I really like the outcome, I'd rather it be seen than kept in a drawer till I'm dead. I don't feel it's all that different in the end, your approach as opposed to mine that is; either you make something that enters the world in a way you feel will mature and grow over the years into something you can be proud of, or you end up with a terrific failure that sometimes (some) people still believe is fantastic.

MC: A failure can be fantastic.

HB: Oh, I agree. Most of how I actually paint is based on failures.

MC: You're referring to the actual painting process?

HB: Yes, the real physical act of the thing. I fail all the time, it's blissful mistakes after blissful mistakes. I am trying to paint in a very classical way: I want to be a "master painter," but I just fall into Impressionism most of the time! Call it impatience, call it lack of talent! I think that impressionism is a failure that we all eventually just got around to liking. I know I said I like it when the painting becomes a finished 'image,' and I think this has a lot to do with the more positive reactions to the work: they 'look' like paintings. Do you know what I mean?

MC: Yes, the drips in the right places, the wiped off parts, the fingerprints and the "artist's touch," right?

HB: Exactly, they have all those cues. Even when I get more abstract or super impressionistic they have that other lovely aspect people love in paintings, the "where's Waldo" effect! Cecily Brown is a great example. I love her work, she must get that all the time: "Oh, there's a penis ... " I love it when someone points out a panda head in the form of a mountain in one of my paintings; it can ruin it for me at times, but when I do see it myself, I usually keep quiet about it!

MC: So, do you think you will get to the point where the way you paint doesn't involve failure or happy mistakes?

HB: Where's the fun in that?

This interview is part of an ongoing project in which Maurizio Cattelan interviews contemporary artists for Flash Art.