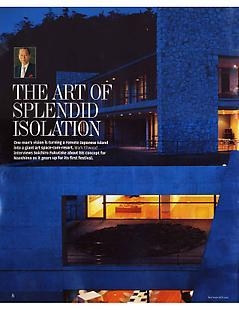 The Art of Splendid Isolation
By Mark Ellwood

Last September, New York-based artist Teresita Fernandez flew to Japan for the unveiling of her latest work, Blind Blue Landscape: thousands of polished, mirrored glass cubes swarming like futuristic bees on an undulating six-metre-Iong wall. But her giant artwork wasn't intended for the lobby of a gleaming Tokyo skyscraper or a high-rise, high-gloss penthouse. Rather, after landing in the capital, Fernandez took a bullet train three hours south to a tiny, isolated island called Naoshima, just off the coast of the city of Okayama. There, her sculpture would be permanently displayed inside the Benesse House complex, a secluded Aladdin's cave of world-class artwork also counting five paintings from Monet's Water Lilies series, a clutch of light sculptures by James Turrell, and dozens of other works by everyone from Jasper Johns and Walter de Maria to recent Venice Biennale winner Bruce Nauman.

Barely covering five square miles, Naoshima is a pilgrimage-worthy art-world playground. "I still think about the first time I saw it: the way it appears like a ghost from the water," says Fernandez. "Naoshima is an almost mythical place." And it's all thanks to one man: reclusive billionaire businessman Soichiro Fukutake, who funded the transformation of this obscure spot from industrial backwater to Brigadoon for the arterati, personally selecting Fernandez for the project, as he does all the artists he funds.

He runs the sprawling Benesse Corporation headquartered in Okayama, whose holdings include nursing homes, an Open University-style correspondence course and the Berlitz language schools. But the frugal Fukutake hasn't spent the profits on fast cars or flashy houses. Instead, he has ploughed much of his fortune into Naoshima, spending about Y11.2bn (about £76.7m) on its makeover.

It's a strange choice: this hilly island in the Seto Inland Sea was, until 30 years ago, home to nothing more than a grimy industrial refinery and a few thousand of its employees. Then Soichiro's father, Tetsuhiko Fukutake, bought a swathe of land and set up an educational camp for children on the site. After he died in 1986, Fukutake Jr focused his attention on transforming Naoshima into a home for his vast contemporary art holdings as well as a place in which he could commission site-specific work such as Blind Blue Landscape.

With the help of Japanese "starchitect" Tadao Ando, Fukutake built the huge hotel-cum-museum complex here. The collaboration between the architect and his patron is intense and personal. "Ando used to be a boxer and his fighting spirit against Tokyo and modern society matched who I was at that time," explains Fukutake, through a translator, of their meeting. "And I liked how he talked with Osaka slang." (So successful is their collaboration that Ando brought François Pinault here to show his best work when pitching for the conversions of two buildings in Venice.)

Among the buildings that make up Benesse House there's a standalone museum, where Jasper Johns is one of the lures, plus a hotel where Fernandez's sculpture slithers along a wall outside the dining room; other works dot the lobby and the waterfront garden, including several squat, jolly figures by the late Parisian sculptor Niki de Saint Phalle and a squat polkadot pumpkin by Yayoi Kusama that's become the unofficial mascot of the island. And on the wall of each minimalist-yet-comfortable bedroom there's also an original artwork.

Ando and Fukutake's jawdropping masterpiece, though, is the Chichu Museum. It's a more recent addition, opened in 2004, and is a short drive from the hotel complex. As we arrive, the museum staff scuttle around, eyeing visitors furtively; they wear lab-coat-like white uniforms and guard a fortified entrance ferociously - which only serves to enhance the illusion that Naoshima is a Bond villain's lair masquerading as a museum (no wonder the post-Fleming novel The Man with the Red Tattoo was partly written and set here). Once admitted to Chichu, visitors burrow down into the semi-submerged museum - Chichu is "underground" in Japanese - to explore one of its five rooms, each home to staggering permanent installations.

One room, covered in tiles that require all shoes to be removed, holds the five Monet canvases; lit obliquely from above, the natural light allows colours to shift and shimmer. There are three pieces by James Turrell, each in its own room, including Open Sky, a cell-like space with a hole cut in the ceiling open to the elements. There's also a gash in the roof above Walter De Maria's monumental Time/Timeless/No Time, the clouds reflecting on the huge granite ball at its centre. Attendants ask visitors respectfully to keep voices low, like a church, and the space resembles a cross between a sci-fi movie set and a minimalist cathedral.

The hushed and reverential impact of much of the work that Fukutake has commissioned is fitting, given that he has described his island retreat as a place that is "spiritual without religion". The impression is only amplified by the fact that visiting Naoshima requires a profound commitment involving that three-hour bullet-train journey from Tokyo to Okayama, another hour on a dawdling commuter rail link to the port, 20 minutes on a lumbering ferry to the island and then a 15-minute drive by minibus to the hotel.

"There's something very ethereal and ephemeral about the idea of Naoshima, and I think it is the effort to get there that gives it this intangible quality," explains Fernandez. "As you get closer, you're farther away from everything else. By the time you get on that ferry, your BlackBerry doesn't work, and so when you get to the island you're in a completely different mindset; your disposition to be engaged is extra-sharp." (With no televisions or internet in many of the hotel rooms, contemplation is actively encouraged.) Her patron's art-world view clearly affected Fernandez. "In the West, we're a little more jaded. But Fukutake really believes that art has an amazing power to impact on the quality of your life; a spiritual uplift. And this is really how he makes choices in Naoshima."

No wonder, then, that Fukutake hasn't limited his investment to the rarefied Benesse complex. Quietly evangelical in his ideas, he has spread his art-powered cult across the island. When I visit the rickety village of Honmura on the eastern coast, the air is hot, the smell a mix of saltwater and tomato plants. There are few people on the narrow streets but, occasionally, the silence is broken by a cluster of excited visitors, jostling to duck into a seemingly nondescript house. However, it's part of another of Fukutake's follies, known as the Art House Projects. Each time a local family decamps, Benesse snaps up their house and turns it over to an artist of Fukutake's choice to re-imagine as a site-specific work - seven have been made over so far with another due this year.

The most impressive is Minamidera, a collaboration between two of Fukutake's favourites: Tadao Ando and James Turrell. Entry is by timed ticket; every 15 minutes a small group is led slowly into a pitch-black room and ushered to benches in silence. It's so dark that the eyes water, straining helplessly to adjust for several minutes; then suddenly, after one blink, a blue rectangle of light shimmers into view at the room's far end - Turrell's Back Side of the Moon. The group begins to shuffle about, fumbling and reaching into the deceptively shallow light sculpture. It's a subtle and shivering trompe l'oeil. The other village installations include a glass staircase on a hilltop Shinto shrine, which is Hiroshi Sugimoto's contribution, Go'o Jinja; and Sea of Time '98 inside the Kadoya house, with Miyajima Tatsuo's signature blinking LED letters submerged in a shallow pool of water.

A billionaire imprinting his own highbrow taste so forcefully on a rural community might be seen as insensitive; but Fukutake is beloved by the locals. For one thing, he has provided ample employment opportunities to a post-industrial area; for another, Benesse's projects stretch beyond art-world indulgences.

Take the latest addition to the island's art hoard: I? Yu by Shinro Ohtake. It's both a public bathhouse and an ornate installation, with an appliqued exterior that's part Terry Gilliam, part Steptoe and Son. Inside, locals of all ages sluice under the showers and chat lazily in the hot pool, watched over by a giant sculpture of an elephant. No one seems fazed by the vintage softcore naturist flicks showing on screens embedded in the benches in the changing room.

The sweetly raunchy bathhouse won't remain the latest addition for long. This year is a major one for Naoshima: on July 19, Fukutake and his team will launch the first Setouchi Art Festival, which will last 100 days and span Naoshima as well as six adjacent islands. The festival will act like a pilot for spinoffs from the original hub, according to Fukutake. "I want to revitalise each region with the good use of contemporary art, and I want this art activity to last forever. It's a message of how the world should be after capitalism," he explains.

Take Inujima, a tiny spit of land with only 55 full-time residents. For a decade in the early 20th century it was home to a copper refinery, later abandoned. Benesse has already funded the reimagining of the refinery: once little more than crumbling piles of bricks dotted with smokestacks, it's now a sprawling, energy-neutral installation by conceptual artist Yukinori Yanagi and architect Hiroshi Sambuichi.

One room is a labyrinth of mirrors that creates light, while another acts as a natural cooling vestibule. For the festival, three Honmura-style "house galleries" will appear in the tiny village next door. And the larger island of Teshima, until now art-free, will undergo a radical transformation. Since 1995, Benesse has awarded a prize during the Venice Biennale to an outstanding artist, which included a site-specific commission in the Seto Inland Sea. Several of those will finally pop up on Teshima this year, including a monumental piece by the mastermind of Tate Modern's turbine-hall sunset, Olafur Eliasson. And at Naoshima proper, the Ando-helmed museum entirely dedicated to the work of Korean minimalist Lee Ufan will debut.

"For years, I've been hearing from artists who've done projects for Naoshima what a special place it is, where art and the environment come together," enthuses Olga Viso, director of the Walker Art Center in Minneapolis. "It gives artists an incredible amount of space and the resources to create something unique that doesn't exist anywhere else." Viso is planning her first visit to Naoshima during the festival, hoping to be inspired by the cache of outdoor installations as she mulls the future of her own monumental sculpture garden. "People who have made the pilgrimage - in fact, everyone I talk to - has affirmed it's so worth the journey."

Even among art-world power players, however, Viso will join a rarefied group. Though visitor numbers have increased radically in the past decade - up from less than 50,000 in 2002 to almost 350,000 in 2008 - just 15 per cent of tourists come from overseas. This obscurity makes Naoshima a precious experience. It certainly inspired London-based collector Anita Zabludowicz, and encouraged her to launch her own riff on Naoshima in Finland. On Sarvisalo - an island one hour east of Helsinki where she owns land with her husband, Finnish businessman Poju - she plans to host several artists' residencies that will hopefully produce site-specific work much like Benesse's bursaries. "I heard about Naoshima and I thought, 'Well, we could do that too,'" she says.

Indeed, it's hard not to leave Naoshima inspired by the Tate-like treasures lovingly installed on their own island. After a few days, it becomes natural to assume that every object is a manmade artwork: are those sandbags by the roadside a guerrilla installation? (No.) What about the black and yellow boats seemingly abandoned in a cove? (yes, by Jennifer Bartlett.) Though given Fukutake's art-loving zeal, perhaps that's precisely the point.